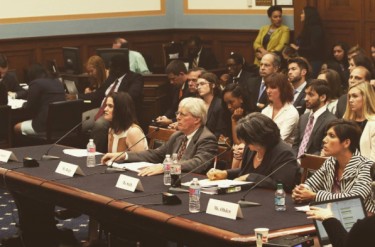 “If abortion is about women’s rights, then what were mine?” Abortion survivor Gianna Jessen posed that question during her testimony Wednesday before the U.S. House Judiciary Committee, which held the first of two scheduled hearings investigating the abortion giant’s practices. The hearing, entitled “Planned Parenthood Exposed: Examining the Horrific Practices of the Nation’s Largest Abortion Provider,” is the latest example of the heightened scrutiny that Planned Parenthood is facing as a result of an undercover video series by the Center for Medical Progress, which exposed the inhumane and potentially illegal abortion practices being conducted in Planned Parenthood offices across the country. The Judiciary Committee is one of three U.S. House committees conducting investigations of Planned Parenthood. The House Energy and Commerce Committee and the House Oversight Committee are also conducting probes to explore whether the abortion provider is “profiting from the sale of aborted fetal tissue,” and “changing procedures in order to maximize the harvesting of fetal tissue.”

During her powerful testimony, Jessen told House Judiciary members that she survived a late-term saline abortion at a Planned Parenthood clinic in 1977. While displaying a graphic photo of an unborn baby with black burn marks across its body caused by a saline abortion, she explained that the procedure usually “burns the baby inside and out, blinding and suffocating the child, who is then born dead, usually within 24 hours.” Miraculously, Jessen did not die but was born alive 18 hours after the saline was administered to her mother. Jessen was later diagnosed with Cerebral Palsy caused by the lack of oxygen to her brain during the saline abortion. She was eventually put into foster care and adopted. “Do not tell me they’re not children,” Jessen said of the unborn victims of abortion. “A heartbeat proves that, so does ultrasound, and so do I.”

In addition to Jessen, lawmakers also heard testimony from James Bopp, Jr., general counsel for National Right to Life Committee, who said that “Current practices employed by Planned Parenthood and various tissue procurement companies, not only violate federal law when applicable, but also many ethical and moral principles.” Bopp also told the committee that, “only a ban on use of fetal tissue from induced abortion, or a ban on abortion itself, will prevent the inevitable abuse.” The House Judiciary Committee plans to hold at least one more hearing as part of its ongoing investigation of Planned Parenthood.

Meanwhile, pro-life lawmakers continue their efforts to end taxpayer funding of the nation’s largest abortion provider. A number of similar measures have been introduced in both the U.S. Senate and House, including several bills either sponsored or cosponsored by North Carolina members: