POV: In Defense of Millennials 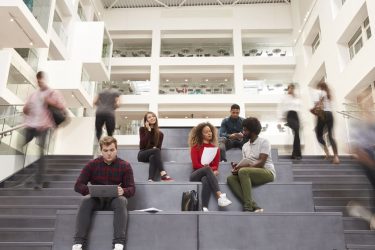 Everywhere we go, people ask my college professor husband, “What’s up with young people these days?” They think he has a unique perspective on “what’s wrong with those darned Millennials!” And he does. But it’s not the assessment people often expect. He usually answers something along the lines of: “The young people I know make me feel very optimistic about the future.”

I have to second that sentiment. When people complain about Millennials (adults between the age of 22-37), I usually think, “I don’t even know who you’re talking about.” Where are all these so-called lazy, entitled young people? I don’t know them. Granted, I spend a lot of time around a university campus, but my kids are Millennials, my friends’ kids are Millennials. I even share an office with a Millennial.

I spoke to a mom the other day and she complained about her newlywed son and daughter-in-law. They bought a house off the beaten path; he’s always complaining because he doesn’t understand why the company where he works is so backward; and they are in no hurry to have kids. This last point really perturbed the mother, so she asked them, “Don’t you want kids?” They said, “We do, but we’d rather have a beach house.” (I laughed out loud!) Then, they said, “If you buy the beach house, we’ll give you some grandkids!” Sounded like a good deal to me! She didn’t think so.

Maybe that’s not the best example. Try this one on for size.

Last night at a basketball game, I sat next to a college student from Raleigh who is opting to move back home instead of spend the money to continue living on her own. She’s the third intelligent, accomplished college student I’ve met recently who doesn’t see the point of putting out the extra expense just to live “the college dream.” These kids are not slouches. One gets mostly A’s in a difficult major, has secured an impressive part-time job at one of the top companies in the Triangle, and is among the nicest, most enthusiastic people you could ever meet.

What about the Millennial who works at the garage where we take our cars to be fixed? His dad is the lead mechanic and owns the business and is one of the hardest working people I know. His son never wanted anything to do with his dad’s occupation but discovered that college wasn’t his thing. We have watched him over the past few years turn into a polite, hardworking, conscientious young man that will make a good living and be a success in whatever he ultimately decides to do.

I could go on. I have dozens of examples.

One thing I have found with Millennials, though, is that they tend to question everything. And I mean everything! Even in regard to what we do here at NC Family. Why does NC Family support that? Why don’t we support this? Why do we use that language? Why did you post that tweet? Why don’t we speak more often in support of policies instead of speaking against things?

I believe that in most cases, these questions are a genuine attempt to gain a better understanding of what we do, why we do it, and how it is relevant to younger generations. These challenges can help us to communicate better if we understand that the underlying principles that some older Conservatives accept as Truth, may need to be re-examined or, at least, explained to younger Conservatives. This might mean providing very basic reasoning behind our stances. It also might mean challenging young people to think more thoroughly about issues and to look carefully for any inconsistencies in what they believe. (We might even discover some new information ourselves!)

So what exactly is up with those darned Millennials? Many want to challenge everything, not settle for mediocrity, make an impact, and shake things up. It’s not convenient, but it sounds like a recipe for innovation and fresh new ideas. Some of our country’s best ideas have come from such thinking and have been far from convenient. I, for one, look forward to watching—and helping—this generation grow into their role of contributing to, building, and eventually leading our local communities, our state, and this great nation.