POV: I’m Engaged! One Millennial Takes on Marriage and Sexuality in Today’s Culture 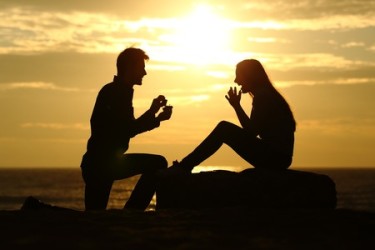 I recently got down on one knee and asked a girl, who is way out of my league in every way imaginable, if she would live the rest of her life with me. Despite all common sense, she said yes. I am 25 and she is 24, which puts us squarely in the “millennial” generation. Like many in my generation, I was simultaneously taught the importance and truth of Christian values by my parents and faith leaders, while watching the cultural celebration of sexual liberalization on television and in the movies. If I am honest, when I was growing up, the television shows Friends and the Real World had as much of an impact on my views and expectations regarding sexuality as did the Bible.

As I came into young adulthood, I rejected the Christian faith in general, and especially rejected the ideas of Christian sexual and marital morality as outdated, prejudiced, misogynistic and above all, just plain weird. The older I have become, and as I have grown into the Christian faith, the more I have realized the beautiful simplicity of Christian sexual morality and its message about self-worth. I believe that these experiences have provided me, and those with a similar story, a unique point of view that allows us to: (1) empathize with a generation that has fully embraced a new and unsafe take on sexuality and marriage, while (2) speaking beautiful truths about the Christian perspective in a way that is loving, nonjudgmental, and compassionate.

So, what does much of my generation believe about sexuality and marriage?

I am certainly not qualified to address the beliefs of an entire generation, but I can speak to what I have personally observed and to a plethora of studies that indicate general beliefs and behaviors. From my personal experience, the notion that one should wait until marriage to have sex is not even close to our generational consciousness. As noted by Roxanne Stone, editor in chief of the Barna Group, an organization that has conducted numerous studies on generational sexual beliefs, the “popular and increasingly assumed narrative of sex as a normal part of the single life, makes the case for saving sex until marriage a radical one.” A recent study found that only 26% of Millennials thought that “moral” was the best way to describe Christian sexual ethics, which was considerably lower than any other generation.  In another study, a full 45 percent of Millennials stated they had participated in casual sex, which was defined as having slept with someone other than a spouse and/or significant other. In yet another study, 57 percent of young adults said they seek out and watch porn at least monthly, and 12 percent said they do so daily.

These beliefs and behaviors are derived, in my experience, from the simple idea held by the vast majority of my peers that sex outside of marriage doesn’t hurt anyone. Sex is just something that adults do when they are attracted to one another, are dating, or are married; and as long as they do it in a “safe” way that is comfortable to them, there is no harm in it.

The only problem with this approach, however, is that my generation is doing a ton of harm to ourselves with our sexual behavior. If you don’t believe me, here are just a few highlights:

Unrestrained sexual desire leads us to believe that physical appearance is more important than character; it urges us to be unfaithful and untrustworthy partners; and it suggests that people are tools used to satisfy a physical urge. At its core, it is selfish. That is why I have chosen to reject it as the basis for my personal sexual ethic, and why I have wholeheartedly embraced the Christian perspective.

This Christian perspective begins with the belief that God intimately “knew” each one of us before the Earth was even formed, and He has a burning love for us that will never be quenched. Because of this love, everybody has eternal value that transcends personal or physical characteristics and our view of marriage and sexuality should reflect this. In a Christian’s perception, marriage is a life-long commitment to put the needs of someone else above your own, because they are worthy of love and are immensely valuable. We believe that a couple becomes one entity, or in the words of Jesus, one flesh, once united in marriage. Sex is the beautiful physical manifestation of this commitment and spiritual oneness.  It is within this protective enclave of commitment—to die to your selfish desires and to live completely for the other person—that sex was designed and is intended. At its core, this perspective is selfless and reinforces the fact that everyone’s worth is eternal and not based in momentary pleasure. As I mentioned earlier, before I came to believe in the Christian faith, I openly participated and believed in the attitudes that are held by the majority of people in my generation, so this article is not intended to be judgmental or condemning. There are a lot of great things about my generation. We care about equality, justice, and have huge compassionate hearts. However, if my generation truly cares about those ideals, and wants to create a better world for our children and future generations, taking a fresh look at our beliefs regarding sexuality and marriage would be a good place to start.

That is why Christians of my generation have such a great opportunity to be examples of God’s love and His design and intent for loving one another. That is one of the many reasons I am excited to stand in front of my beautiful bride this summer and commit to a life of dying to myself and living for her and for God.