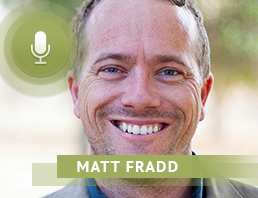 And as is customary with topics of this sort, we will certainly endeavor to keep our conversation G-rated, but I do want to let parents know that portions of today’s program may not be suitable for younger listeners.

And with that, Matt Fradd, I want to welcome you to Family Policy Matters. It’s great to have you on the show.

MATT FRADD: Great to be here! Thanks for having me.

JOHN RUSTIN: Matt, you argue that “few things in our society are more concerning than pornography.” With all that’s going on in our culture and in the world around us, help our listeners understand why you place this issue of pornography at such a high level of concern for us?

MATT FRADD: Ever since the advent of the Internet, pornography has become accessible, affordable and anonymous in a way that it has never been before. Because of that, porn use has skyrocketed. And certainly since the advent of “tube sites” in about 2006, many people are beginning to speak out about the deleterious effect that pornography is having in their lives— not just religious people, but atheists, agnostics, and people of all different walks of life. What we used to think was, that in order for a substance to be addictive, it had to be something external to the body that you put into the body, like nicotine or heroine or whatever. But since neuroscientists started looking in the brain, it’s changed how we think of addiction. It’s not necessarily about the substance and how it’s brought into the body. It’s really about the sort of mechanisms it triggers in the brain. So as I sit here today during this interview, there are currently 33 neuroscience-based studies on porn usage, and every single one of them supports the addiction model and attests to the fact that there are these sort of addictive traits taking place in the brain, which leads to a whole constellation of problematic effects.

JOHN RUSTIN: Matt, what is the number one myth about pornography that you encounter? And how do you refute that myth as you’re talking to people and communicating about it?

MATT FRADD: Today in our culture, we’ve really canonized ‘choice’ haven’t we? Like choice is more important than what’s right, what’s good, what’s noble. So people will often say, “Well, people have a right to do whatever they want.” And I usually respond by saying, “Well, people can of course do whatever they want, but it’s prudent before engaging in an action that may have deleterious effects that one takes stock of the possible negative consequences that might be brought about through engaging in that behavior.” And so, I really try and educate people and show them that consuming pornography can lead to less satisfying sexual life, it can lead to things like sexual dysfunction, it can lead to sexual aggressiveness, and it can even lead to shrinkage in different parts of the brain, as the 2014 study showed. So, these are the sorts of things I wish somebody had told me back when I was 17-18 and engaging in this sort of material. I just thought, like everyone else thought, that this was harmless entertainment and if you were against porn you were somehow anti-sex.

JOHN RUSTIN: You talk about a movement called Fight the New Drug, and—you’ve already spoken about this a little bit—but you and some others are beginning to refer to pornography more as a drug because of the—as you’ve already discussed—some of the traits. Are there more aspects of pornography that relate to a drug addiction like alcohol, illegal drugs and things of that nature?

MATT FRADD: Certainly, pornography isn’t a drug in the sense that no one’s injecting it, no one’s inhaling it, that sort of thing. But what pornography consumption does is illicit powerful neurotransmitters in the brain, which the brain can become addicted to. So, very few drugs are addictive, right? In order for a drug to be addictive, what it must do is something very specific: it must boost a neurotransmitter called dopamine in the reward center of the brain. So what drugs do, they don’t create anything new in the brain, rather they amplify or decrease existing mechanisms in the brain. So, all mammals have a reward system in the brain and it’s that thing that gives us a craving to engage in behaviors that are either life-promoting or life-enhancing. That’s we get that big feeling of “I’ve got to have that hamburger” or “I’ve got to work out today” or “I want to have sex.” Without dopamine, sexual activity wouldn’t be that exciting. So, what pornography does is it boosts that dopamine in the reward center of the brain and a down regulation takes place. So, the reward center begins to numb itself because of the over stimulation. Dopamine literally begins to atrophy and the person is quite honestly in a state of dopamine craving. So, in order to boost the levels of dopamine up—you know just to feel normal… This is why people looking at pornography find that they have to view more pornography—and very often more deviant or harder forms of pornography—just to get the same high.

MATT FRADD: Whenever we try to engage with someone who we disagree with, it’s always important that we do our best to try to understand them. And so, what might the feminist be saying when they try to say pornography can be liberating. I think what they might mean is, this old Victorian idea that men enjoy sex while women endure it isn’t true. And perhaps, in their estimation, sometimes that’s the way we have looked at sex. And so some women would like to say, “Look, I can take charge of my sexuality. This can be a liberating thing for me to do. And if I find it liberating, then it’s liberating.” So the first thing to say, no one’s saying we want to go back to this sort of Victorian puritanical era where the sight of a woman’s ankle could cause scandal. That seems to me to be clearly unhealthy. But that doesn’t mean that pornography is therefore liberating to women. Allowing millions of men to pleasure themselves while watching you—in many cases—being dominated in very unbeautiful ways, to think that you’re somehow fighting a system of patriarchy to me just seems the exact wrong way around. It seems to me you’re feeding into it, not fighting it.

MATT FRADD: I’m going to say something that sounds like it’s out of the middle of a Hallmark card. Because of that, it might be tempting for us to dismiss it. Here we go: I think we’re made by love to love and for love. And as a Christian, I think that’s theologically accurate, that we have love as our origin, love as our vocation, and love as our destiny. And therefore, if we don’t get love right, we won’t get life right. The more we participate in activities and behaviors that are contrary to love, the more senseless our life will become. So what is love? Aquinas would say, “Love is willing the good of the other for the sake of the other.” But it seems with pornography consumption at least, something contrary to love is at play. It seems to be merely a matter of use in which I’m not interested in the interior life of this particular performer, her hopes and dreams and aspirations, and so forth. She’s very replaceable. She’s just a collection of body parts and therefore I use her for an ignoble end. And so for that reason, I think no porn use can ever be justified. Certainly if one uses pornography compulsively, you’ll have more of a deleterious effect on them, but even moderate consumption leads to negative effects as well. And so, if we want to have a beautiful life, if we want to have a beautiful sex life, then we should quit porn. I really think, and I’m not trying to be hyperbolic here, if one is for science and pro-love, then those are two very good reasons one ought to seriously consider being anti-porn.

MATT FRADD: Let me say three things, one to the consumer, one to the spouse of the consumer, and then one to the parents. To the consumer, maybe you’re a man, maybe you’re a woman who consumes pornography, I just want to say, you aren’t your sins. You’re not the bad things you’ve done. You’re not the things you might be addicted to. You are a beloved son and daughter of God, and God certainly is not scandalized by your behavior. He loves you and He knows what you’re seeking. What you’re seeking isn’t to hurt people or to reduce them to body parts, you’re looking for relief. You’re looking for stimulation and excitement and for joy and so forth. And they aren’t to be found in pornography. Just as a brother I would say, trust in the mercy of God. Get to confession if you haven’t already, and then have the strength to consider the possibility that you might be being called to go to say therapy or a 12-step group to get this issue under control.

Thirdly to the parents I would say, listen to me, if you’re going to buy your child an electronic device,[…] you must monitor that device. If you’re not willing to monitor it, don’t buy it because I think you and I as parents will be held accountable on Judgment Day for how we have raised our children. We must put good filtering and accountability on all of our devices or else what we’re doing is giving our children essentially portable X-rated movie theaters, and it’s really not their fault when they end up becoming addicted to this stuff. And so just a word of encouragement to parents, give your kids an internal filter for the unfiltered world in which they live, and love them and don’t get angry with them. Because if you do that they’re never going to come back to you again and maybe share that they’re struggling with this sort of stuff.

MATT FRADD: People can go to thepornmyth.com. They can buy my book there. They can buy it on Amazon. I should also let people know that I don’t make a cent from any book purchase people might make. We’ve decided that all the royalties will go to a group in San Diego that helps support sexually trafficked women. So in buying the book, you’ll not only educate yourself, you’ll be supporting that wonderful apostolate called, “Children Of The Immaculate Heart.” As far as more research, I’d say go to our website integrityrestored.com, subscribe to our Podcast. I know you’ll learn a lot more.