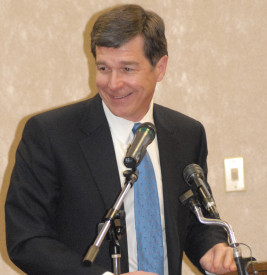 When Cooper made the announcement that he was refusing to fulfill his constitutional duty to represent the state in the lawsuit against HB 2, the ACLU and Equality NC cheered and applauded. Incidentally, the HB 2 lawsuit was filed by the ACLU and national homosexual rights group, Lambda Legal on behalf of Equality NC.

What is so ironic and sad about this is that the ACLU and Equality NC derided the State Legislature last year for passing SB 2, which was designed to protect the religious liberty rights of civil servants in North Carolina. Equality NC called on Governor Pat McCrory to veto the bill stating, “no public official is exempt from the constitution they’ve sworn to uphold.” They also claimed SB 2 was “discriminatory legislation” because it would allow state employees to “refuse service” to the citizens of North Carolina.

What is different about SB 2 is that the General Assembly establishes the powers and duties of magistrates and registers of deeds, and it is well within the authority of our state lawmakers to change those powers and duties. If the legislature chooses to do so, which they did in SB 2, magistrates and registers of deeds are fulfilling their oaths of office by following the new law.

The powers and duties of the Attorney General, however, have not changed. As top law enforcement officer and lawyer for the State of North Carolina, the Attorney General is sworn to represent the State in legal matters, “To defend all actions in the appellate division in which the State shall be interested, or a party, and to appear for the State in any other court or tribunal in any cause or matter, civil or criminal, in which the State may be a party or interested.” (NCGS § 114-2(1)) Clearly, the State is a party in the HB 2 lawsuit.

Apparently in the eyes of Equality NC, it is entirely acceptable for the Attorney General to “exempt” himself from his constitutional duties and to “refuse service” to the citizens of North Carolina when it serves their purposes.

This is just another example of the hypocrisy and bully tactics of the left, which will say and do whatever is most expedient to promote its political agenda.