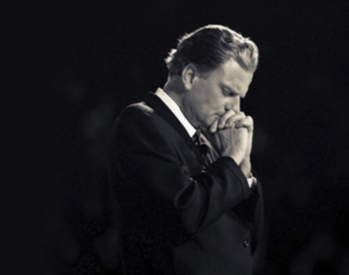 Billy Graham, a world-renowned evangelist from the mountains of North Carolina who led millions to Christ, died early this morning at the age of ninety-nine. Over his lifetime, Graham spoke into the lives of many of the world’s leaders, including Winston Churchill, Queen Elizabeth II, Mikhail Gorbachev, and Pope John Paul II. He had private audiences with every U.S. president since World War II. In 2013 the North Carolina General Assembly passed a resolution that officially recognized Billy Graham as “North Carolina’s Favorite Son.”

“While we mourn the loss of such an incredible man of God, we rejoice in the knowledge that Billy Graham stands in the presence of his Lord and Savior,” said NC Family President John L. Rustin. “We pray for comfort for the Graham family, and we stand in awe of the millions around the globe whose lives have been so profoundly impacted by the commitment of Billy Graham to spread the Good News of Jesus Christ to all the world. Today I am reminded of what Rev. Graham reportedly said about his future death:

“Someday you will read or hear that Billy Graham is dead. Don’t believe a word of it. I shall be more alive than I am now. I will just have changed my address. I will have gone into the presence of God.”

Graham was born on November 7, 1918 in Charlotte, North Carolina. He attended Wheaton College in Illinois where he met Ruth McCue Bell. They were married shortly after graduation and would go on to have 5 children- Virginia, Anne, Ruth, Franklin and Nelson. They were married 63 years until Ruth’s death in 2007. Graham preached the Gospel of Jesus Christ to millions, opposed racial discrimination in the 1950s and 1960s, was a renowned humanitarian and philanthropist, authored more than 31 books, but above all, was a faithful servant of Jesus Christ in every aspect of his life.