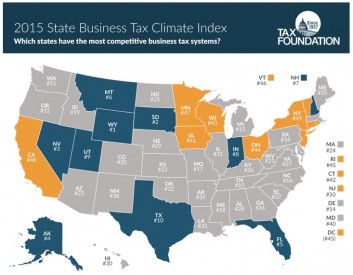 North Carolina’s tax reform efforts established a new record for the most improved state in an annual report recently released by the national Tax Foundation. The State Business Tax Climate Index, which was published on October 28, named North Carolina the most notable ranking change due to the State’s dramatic climb from 44th place last year to 16th place this year. That change represents “the single largest rank jump in the history of the Index,” according to the Tax Foundation. The Index credited changes to North Carolina’s corporate, individual, and sales tax structures and rates, while noting that lawmakers’ phase-in approach to tax reform bodes well for the State’s ranking to continue to increase in the coming years.

The Index strives to provide a gauge that allows business leaders, government policymakers, and taxpayers to compare the tax systems of different states by comparing them “on over 100 different variables in the five important areas of taxation (corporate taxes, individual income taxes, sales taxes, unemployment insurance taxes, and property taxes).” North Carolina made its largest gains on the individual income tax score, which benefited from the General Assembly’s 2013 restructuring of the former multi-bracketed system to the current single-bracket system with a lower tax rate of 5.8 percent and “a generous standard deduction of $7,500.” Lowering the corporate income tax rate from 6.9 percent to six percent also contributed to the higher ranking. Finally, North Carolina’s rank benefitted from the State’s simplification of the sales tax structure. Both the individual and corporate tax rate reductions that so heavily influenced North Carolina’s meteoric rise this year are scheduled to continue dropping through 2017.

As the Index points out, “states with the best tax systems will be the most competitive at attracting new businesses and most effective at generating economic employment growth,” which are both at the forefront of American voters’ and lawmakers’ minds. Interestingly, the Index cites the Department of Labor’s reports “that most mass job relocations are from one U.S. state to another rather than to a foreign location,” making competition between individual states’ tax structures even more competitive.