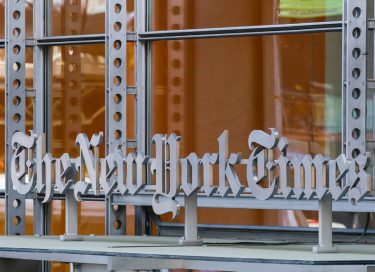 It goes unsaid these days that a heightened level of bias exists in the mainstream media—whether from the right or the left—but an article in Sunday’s New York Times demonstrates just how far this bias has gone.

“’Transgender’ Could be Defined Out of Existence Under Trump Administration” reads the headline of the October 21 article. The first sentence declares: “The Trump administration is considering narrowly defining gender as a biological, immutable condition determined by genitalia at birth, the most drastic move yet in a governmentwide effort to roll back recognition and protections of transgender people under federal civil rights law.” (emphasis added).

The article correctly credits the Obama administration for loosening “the legal concept of gender in federal programs,” but fails to mention that the terms “sexual orientation,” “gender identity,” “gender expression” and “transgender” do not exist anywhere in federal civil rights laws. Congress has never recognized these classifications for legally protected status in the federal code. According to reports, the Trump administration is simply trying to reinstate the definition of “sex” as “male or female based on immutable biological traits identifiable by or before birth,” which has been the understanding in our nation since its inception.

At stake is the ability of men to identify as women and freely access women’s bathrooms, showers, locker rooms, changing facilities, dormitories, sports teams, and other gender-defined facilities and activities.

According to the Times, “The move would be the most significant of a series of maneuvers, large and small, to exclude the population from civil rights protections and roll back the Obama administration’s more fluid recognition of gender identity.” The Times goes on to posit that, “The new definition would essentially eradicate federal recognition of the estimated 1.4 million Americans who have opted to recognize themselves – surgically or otherwise – as a gender other than the one they were born into.”

But NC Family’s legal counsel Jere Royall sees it another way. “The statement that individuals who identify as transgender would have no legal protections whatsoever under the federal law is is simply untrue,” Royall says. “These individuals would have the same legal protections as every other American citizen under our civil rights laws. That protection simply would not extend to a classification that is not part of the federal code.”

The Trump administration reportedly has called for a uniform definition that is determined “on a biological basis that is clear, grounded in science, objective and administrable,” which seems to be a common sense approach. But not according to the Times.

Over the past few years in North Carolina, we have seen a formerly reputable (albeit somewhat biased) mainstream media run off the rails during the debate over House Bill 2. Credibility and journalistic integrity has taken a backseat to activism, especially when it comes to the notion of a fluid sexual identity. Although we have come to expect some level of bias in the media, Sunday’s New York Times article seems to signal a new level of prejudice in the direction of a hyper-activist media and away from balanced, truthful reporting.