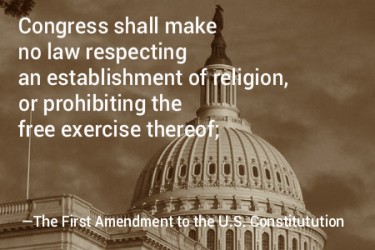 Six North Carolina residents are suing the State of North Carolina over a new law that allows certain public officials to recuse themselves from all duties related to marriage ceremonies if they have a sincerely held religious objection to marrying same sex couples.

The federal lawsuit Ansley vs. North Carolina contends that Senate Bill 2(SB 2) is unconstitutional and that magistrates who recuse themselves are renouncing their oath to follow the Constitution and laws of the United States. It also levels the accusation that these public servants “believe as a matter of publicly sanctioned religious creed that gays and lesbians are not entitled to the full rights of other citizens.”

“SB 2 was designed to ensure that civil marriages would continue in all 100 counties of the state while also acknowledging that the religious freedoms guaranteed by our federal and state constitutions apply to all citizens, including public servants,” said NC Family President John L. Rustin. “To suggest that public officials who recuse themselves from performing marriages are not able to execute their duties with integrity is completely unfounded. This is clearly an attempt to force people of faith out of government.”

Under SB 2, magistrates can opt out of performing marriages for a period of at least six months. The law stipulates that every county must guarantee at least 10 hours per week in which anyone can marry.

The three couples filing suit are: a married same-sex couple; an engaged same-sex couple; and a married interracial couple who were initially denied, but later granted, a marriage license in NC in the 1970s. They contend that SB 2 “violates the Establishment Clause of the First Amendment and the Equal Protection and Due Process Clauses of the Fourteenth Amendment of the United States Constitution.”