Needle and Syringe “Exchange” Gets Easier in N.C. 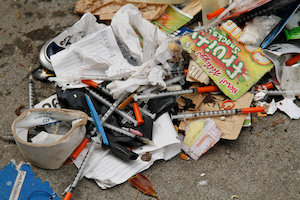 It will now be easier for those addicted to drugs in North Carolina to receive free needles, syringes, and other “injection supplies” following the passage of a new law that also paves the way for state tax dollars to pay for them. HB 325—Opioid Epidemic Response Act, which passed the General Assembly in mid-July and was signed by Gov. Roy Cooper last week, is aimed, in part, at combatting the spread of infectious diseases through shared needles. Critics say, however, that it may make the streets more dangerous for sanitation workers and law enforcement and also may appear to condone and even facilitate illicit drug use.

Proponents say HB 325 is part of an effort to reduce a staggering opioid epidemic gripping our state and nation. While supporters call the program “syringe exchange,” there is actually no requirement in the law that dirty needles and syringes be turned in “in exchange” for new ones. Therefore, critics says it’s more accurately named “syringe distribution” because these programs increase the number of dirty—and potentially disease-carrying—needles in trash cans, lying on streets, or in the pockets of those addicted to drugs. Some communities across the country are seeing an epidemic of syringes discarded on city streets. Several cities in Orange County, California are suing that state and demanding a halt to the needle distribution programs there, “after complaints about discarded needles on the ground and in public buildings and workers being pricked by them.”

But according to HB 325, the hope is to “reduce needle stick injuries to law enforcement officers and other emergency personnel.” Other goals outlined in the bill are that it will “reduce the spread of HIV, AIDS, viral hepatitis, and other blood borne diseases,” and reduce drug overdose deaths in our State. In addition, organizations that run the syringe distribution programs are tasked with offering help to those in the throes of opioid and other drug addiction and directing them to resources where they can get help.