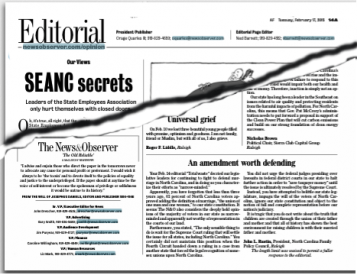 On February 14, the Raleigh News & Observer published an “Our Views” editorial complaining that state legislative leaders are wasting taxpayer money by continuing to defend North Carolina’s marriage laws, including our constitutional Marriage Amendment, in court. As president of the North Carolina Family Policy Council, I could not – in good conscience – allow the N&O’s criticism to go unanswered. Below is my Letter-to-the-Editor in response, which appeared in the February 17 print version of the paper.

“Your Feb. 14 editorial ‘Total waste’ decried our legislative leaders for continuing to fight to defend marriage in North Carolina, and in doing so you characterize their efforts as ‘narrow-minded.’

Apparently, you have forgotten that less than three years ago, 61 percent of North Carolina voters approved adding the definition of marriage, ‘the union of one man and one woman,’ to our state constitution. It seems The N&O also considers the deeply held opinions of the majority of voters in our state as narrow-minded and apparently not worthy of representation in the courts of our land.

Furthermore, you stated, ‘The only sensible thing to do is wait for the Supreme Court ruling that will settle the issue for all states, including North Carolina.’ You certainly did not maintain this position when the Fourth Circuit handed down a ruling in a case from another state that forced the legal recognition of same-sex unions upon North Carolina.

You did not urge the federal judges presiding over lawsuits in federal district courts in our state to halt further action in order to ‘save taxpayer money’ until the issue is ultimately resolved by the Supreme Court.

Instead, you have attempted to belittle our state legislature, impugn the will of the voters of North Carolina, ignore our state constitution and object to the notion of full and complete representation before our nation’s judiciary.

It is tragic that you do not write about the truth that children are created through the union of their father and mother and that all of history has shown the best environment for raising children is with their married father and mother.”

The following is the News & Observer’s editorial that appeared in the “Our Views” section of the paper on Saturday, February 14. The print version was entitled, “Total Waste: Republican leaders are wasting taxpayer money defending a gay marriage ban.”

“It would be political comedy theater, this stubborn refusal of North Carolina’s Republican leaders to accept court rulings recognizing gay marriage, except that there’s nothing funny about wasting, so far, over $100,000 of taxpayer money on private attorneys to continue the fight.

The state has both a law and a constitutional amendment forbidding same-sex marriage, but the U.S. 4th Circuit Court of Appeals, which has jurisdiction over North Carolina, overturned similar laws in other states. That put gay marriage in place in this state.

GOP leaders, however, determined to stand by their own narrow-mindedness, insisted on appealing and hired private lawyers to do it. Attorney General Roy Cooper, a Democrat, rightly called the appeals process a waste and wasn’t going to get involved.

The tab so far is $107,000, and it’s not over yet because the private lawyers are still working.

But here’s what ought to outrage all North Carolinians who’d rather the state spent its money on teachers or public works or roads: The U.S. Supreme Court has agreed to settle the legality of same-sex marriage once and for all with upcoming cases. In the meantime, the high court has declined to overturn a federal judge’s ruling that Alabama’s restrictions on gay marriage were unconstitutional.

That has been interpreted as a sign that the Supreme Court will ultimately legalize gay marriage.

But let’s say the high court leaves the decision to the states. North Carolina’s Republican leaders are still wasting money on a ludicrous crusade.

The only sensible thing to do is wait for the Supreme Court ruling that will settle the issue for all states, including North Carolina.

Republicans are hanging their determination to continue writing checks to lawyers from the taxpayers on a thin thread. They say that because voters approved a ban on same-sex marriage, the state ought to defend it.

That’s nonsense. What would House Speaker Tim Moore and Senate leader Phil Berger have said to Robert E. Lee at Appomattox? ‘Who cares if we surrendered? Mount up, General, and let’s go get ’em.’

What makes this all the more maddening is that state leaders are spending the public’s money even as there’s a revenue shortfall in part because of their tax cuts for businesses and the wealthy and that they claim to be representing the party that’s the guardian of the public purse.

Republican Charles Jeter of Huntersville rightly said that the state would be ‘better served by allowing other states to spend their money. I don’t think us spending $100,000 is going to change the outcome of the Supreme Court’s decision. The question becomes, are we participating for political PR purposes or legal strategy?’

Everyone knows the answer.”