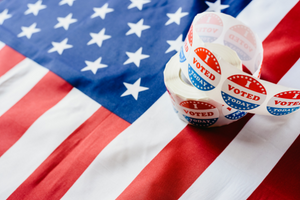 Election Day is less than a month away, and in-person early voting in North Carolina starts on October 20. Here at NC Family, we are working hard to get valuable information into the hands of voters, so you can be well-informed before you cast your ballot.

Last week, NC Family went “Live” with our nonpartisan 2022 Voter Guide website at NCFamilyVoter.com, and we began distributing printed voter guides across the state. This week, we are releasing a series of articles to help provide some context for the upcoming elections. We will start with the U.S. Senate and U.S. House races; then delve into the statewide races for the State Supreme Court and Court of Appeals; then we will look at competitive races for the North Carolina Senate and conclude with a review of competitive State House races.

North Carolina’s U.S. Senate race is a highly competitive open-seat contest to replace retiring U.S. Senator Richard Burr. The primary matchup is between Republican Congressman Ted Budd and former State Supreme Court Justice, Democrat Cheri Beasley. Also on the ballot are Libertarian Shannon Bray and Green Party Candidate Matthew Hoh. According to recent polls, Budd and Beasley are in a dead heat, and the national parties and outside groups are pouring millions into this campaign to try to capture this pivotal seat, which could sway the balance of power in the U.S. Senate. This past Friday, Budd and Beasley faced off in a lively debate on Spectrum News 1. Due to the competitive nature of North Carolina’s political environment, this race is likely to go down to the wire and will probably be decided by a very slim margin—meaning every vote counts!

Following the 2020 U.S. Census, North Carolina added a 14th congressional district due to significant population growth. The Census, which is conducted every 10 years, also prompts states to redraw congressional and state legislative district maps to ensure proportional representation. The congressional map approved by the North Carolina General Assembly this past session was challenged in court, and following litigation, a panel of three court-appointed “special masters” drew the map that is being used this year.

Cook Political Report and our friends at the John Locke Foundation have conducted separate “partisan rating” analyses of North Carolina’s 14 congressional districts. These examinations suggest that our newly redrawn congressional districts are likely to elect seven Republicans and six Democrats. U.S. House District 13 is expected to be the most competitive of the 14 districts and is rated as a “Toss-Up” or too-close-to-call race. It is important to understand that these “partisan rating” analyses are based on voter demographics of the districts. Many other factors can influence the ultimate outcome of elections like candidate performance, voter turnout, campaign advertising, and the spending of “outside money” by interest groups and Super PACs.

Below, we have provided a listing of the congressional races with links to the candidates’ pages on NCFamilyVoter.com, so you can see their responses to our Voter Guide survey and visit their campaign websites, which are also linked. We have also provided the “partisan rating” of the districts and the general location of the districts within the state.

US House District 2—Incumbent Democratic Congresswoman Deborah Ross is being challenged by Republican Christine Villaverde in this “Solid Democratic” district in the northern portion of Wake County.

US House District 5—Incumbent Republican Congresswoman Virginia Foxx is being challenged by first-time candidate Democrat Kyle Parrish in this “Solid Republican” district in the northwestern part of the state.

US House District 8—Incumbent Republican Congressman Dan Bishop is being challenged by Democrat Scott Huffman, a navy veteran and businessman, in this “Solid Republican” district located north and east of Charlotte.

US House District 10—Incumbent Republican Congressman Patrick McHenry is being challenged by Democrat Pam Genant, an army veteran and registered nurse, in this “Solid Republican” district in the western Piedmont.

US House District 14—Democratic State Senator Jeff Jackson is being challenged by Republican Green Beret and businessman Pat Harrington in this “Likely-to-Solid Democratic” district in Mecklenburg and Gaston counties.