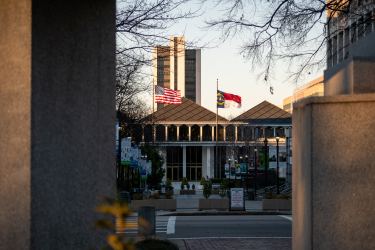 Speculation that the 2022 mid-term election was going to be a veritable “tsunami” for Republicans across the nation did not come to fruition, but the GOP did gain valuable ground in North Carolina. Just over half of our state’s 7.4 million registered voters cast ballots in yesterday’s General Election, and they handed Republicans valuable victories. These include winning a hotly contested U.S. Senate race, gaining a solid majority on the State Supreme Court, and picking up additional seats in the State Senate and in the State House of Representatives. Despite these gains for Republicans, though, many questions remain unanswered on both the state and national levels.

In the U.S. Senate race, Republican Ted Budd bested Democrat Cheri Beasley by three-and-a-half percentage points. Budd’s victory keeps this seat—which is being vacated by retiring three-term Senator Richard Burr—in GOP hands. Going into the election, the U.S. Senate was split 50-50 (including two Independents who typically vote with the Democrats), and Democratic Vice President Kamala Harris was the tie-breaking vote. At the time of this writing, Republicans unofficially held 47 of the 100 U.S. Senate seats, while Democrats held 46 (plus the two Independents). Races in Alaska, Arizona, Georgia, Nevada, and Wisconsin are still too close to call.

Due to population growth, North Carolina picked up a 14th U.S. House seat in 2022, and the election resulted in a 7-to-7 split among our congressional delegation. Incumbent Republicans Dan Bishop, Virginia Foxx, Richard Hudson, Patrick McHenry, Greg Murphy, and David Rouzer successfully defended their seats, as did incumbent Democrats Alma Adams, Kathy Manning, and Deborah Ross. Democrats Don Davis, Valerie Foushee, Jeff Jackson, and Wiley Nickel, as well as Republican Chuck Edwards—all of whom are current members of the North Carolina Senate—won their races and will be heading to our nation’s capital. As anticipated, Nickel’s race against Republican Bo Hines in the 13th District was the closest, being decided by just over 7,000 votes in a race in which 273,822 votes were cast.

As of this writing, 378 of the 435 U.S. House races have been called—203 for Republicans and 175 for Democrats. The remaining 57 seats are undecided or too close to call, and 218 seats are needed for a majority.

At this point, it is uncertain what these overall margins of victory will mean. While the State Senate appears to have captured just enough seats to secure a veto-proof supermajority, the State House is one vote short. This means GOP lawmakers will have to work across the aisle to garner the necessary vote(s) to override Governor Cooper’s veto, which is expected to come into play on just about any legislation addressing abortion, school choice, parental rights, human sexuality and LGBTQ issues; the budget, and other significant matters. Based on the final outcome of pending federal races, similar dynamics are likely to exist in Washington D.C. as well.

This is all the more reason for us to remain engaged, involved, and in prayer!