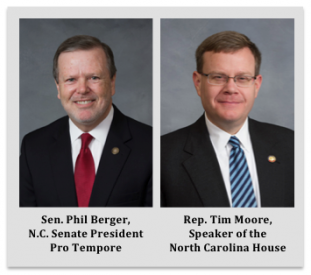 “We congratulate Senator Berger, Speaker Moore and the other legislators who have been selected for these extremely important leadership offices,” said John L. Rustin, president of the North Carolina Family Policy Council. “The state and its elected lawmakers have placed great faith in these individuals, and we look forward to working with them – and with all the members of the 2015-2016 North Carolina General Assembly – to promote and defend family, faith and the sanctity of human life in our great state.”

It was also announced that Rep. Edgar Starnes (R-Caldwell), who was elected to his 11th term in the N.C. House this past November, will resign from the House in order to accept a post as senior policy advisor and legislative liaison for the State Treasurer’s office. A replacement for Rep. Starnes will be nominated by the Caldwell County Republican Party.