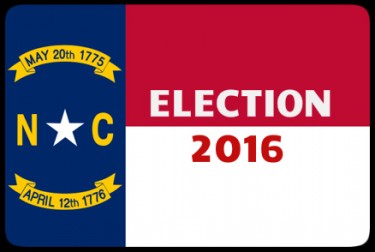 If you’re considering a run for elected office next year, time is running out to throw your name into the hat. Citizens who wish to run for office in 2016 have until this coming Monday, December 21, 2015 to file a Notice of Candidacy with the NC State Board of Elections. Since the candidate filing period began on December 1, 2015, nearly 1,300 North Carolinians have filed to run for hundreds of federal, state, and local elected offices in 2016. For more information on how to file, see the NC Board of Elections’ Candidate Filing web page.

The North Carolina General Assembly moved up North Carolina’s primary election from its traditional May date to Tuesday, March 15, and this primary will be the first election in which most North Carolina voters will be required to show a photo ID in order to vote at the polls. The 2016 General Election will take place on Tuesday, November 8.

Although the highest profile race in 2016 will be for U.S. President, North Carolinians will also choose a large slate of other federal, state, and local representatives, including:

In order to participate in the March 15 primary, citizens must be registered to vote by February 19, 2016. Absentee voting by mail begins on January 25, while One Stop Early Voting will run from Thursday, March 3 through Saturday, March 12.

As North Carolina voters have come to expect, the North Carolina Family Policy Council will once again produce a Voter Guide prior to the 2016 General Election to assist voters in better understanding where the candidates stand on important family-related issues like sanctity of human life, marriage, religious liberty, parental rights, choice in education, gambling, tax policy, and much more.