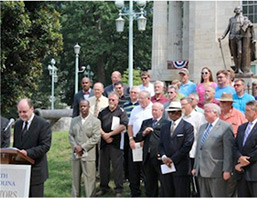 Despite the claims of a national atheist group, North Carolina’s public school teachers and staff do not lose their First Amendment right to private religious expression when they enter the classroom, according to a letter sent to school administrators this week by Alliance Defending Freedom (ADF) and co-signed by the North Carolina Family Policy Council. The ADF letter to North Carolina’s school districts, which is also co-signed by the North Carolina Values Coalition, is aimed at countering misinformation being circulated to local school districts by Americans United for the Separation of Church State (AU) about Senate Bill 370-Respect for Student Prayer/Religious Activity, which was passed by the N.C. General Assembly in mid-June.

Public school students had barely started back to school, when AU sent a letter on August 25 to school districts across North Carolina, warning “schools not to comply with” portions of S.370, and advising them to “not allow public school faculty and staff to participate in prayer and worship with students.” At issue for AU is a section of S.370, “Religious Activity of School Personnel,” which states: “Local boards of education may not prohibit school personnel from participating in religious activities on school grounds that are initiated by students at reasonable times before or after the instructional day so long as such activities are voluntary for all parties and do not conflict with the responsibilities or assignments of such personnel.”

AU claims in the letter that, “the Establishment Clause of the First Amendment to the U.S. Constitution prohibits school personnel from leading or participating in student religious activity, and the school district’s obligations under the First Amendment trump those arising from state law.” AU goes on to advise school leaders that “to avoid legal liability,” they must ensure that “school district officials do not lead or participate in religious activities at school-sponsored activities or events.”

ADF responded to AU’s efforts on September 2 in its own letter to school superintendents that advises them to disregard AU’s “inaccurate and blanket demands.” The ADF letter explains that, “AU completely ignores the importance that the particular facts and circumstances of a situation play in determining what is permissible at school.” According to ADF, school leaders can look to the following three general guidelines to help them stay in compliance with both North Carolina law and the U.S. Constitution:

The ADF letter goes on to explain that, “SB 370 properly recognizes the rights of school employees during non-contract time … [and] ensures that when school employees are not on the clock, their right as private citizens to lead and actively participate in religious expression with anyone is fully protected by the First Amendment.” According to ADF, “whenever [school administrators] anticipate that school employees will be present during the course of student-initiated and student-led activities involving religious expression, the school should explain that the primary purpose for such school employee attendance and involvement is to ensure student safety and maintain order. But under such circumstances, nothing forbids teachers from respecting student-initiated and student-led prayer by bowing their heads.”