You may think that since this session of the North Carolina General Assembly is winding down, there is nothing all too important happening at the legislature in Raleigh. You would be wrong! There are several important bills still being debated on the House and Senate floors, and in committees, and NC Family is downtown every day to monitor the progress of various legislation that could impact North Carolina families.

In the following three videos, NC Family President John L. Rustin updates you on several important issues going on at the NC Legislature. First, the 2019-2020 budget, which was vetoed by Governor Roy Cooper, but has remained on the House calendar for a veto override vote for several weeks now: 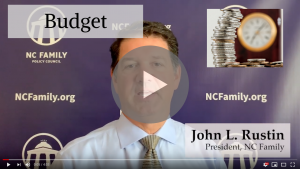 Several gambling bills have also just passed or are still moving through the NC Legislature: 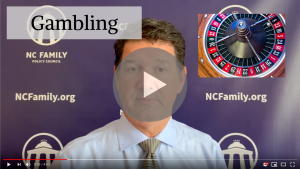 Finally, the 2019 Farm Act has been the subject of heated debate down at the General Assembly, primarily due to its focus on hemp and marijuana, and the legal status of certain hemp products that resemble marijuana: 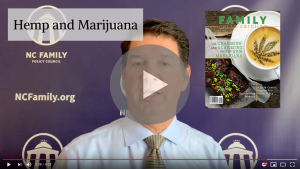 For a transcript of these videos, see below. For more information about these bills, and for continued updates on the happenings of the NC General Assembly, visit our website at NCFamily.org, and be sure to follow us on Facebook, Instagram, and Twitter.

This is John Rustin President of the North Carolina Family Policy Council with a brief legislative update for the week of July 22.

The Budget Bill, House Bill 966, is still in limbo as the legislative session continues. The state spending plan was ratified by the North Carolina General Assembly on June 27, but was vetoed by Governor Roy Cooper the following day. The House is currently working to secure the votes necessary to override the veto, but it is unclear whether this will happen, because Republicans need to pull over at least 7 Democrats to get the constitutionally require three-fifths vote to override. Of particular interest to NC Family are provisions that provide funding for a number of important pro-life organizations as well as continuation of the state’s strong school choice initiatives like Opportunity Scholarships.

On the gambling front, the legislature has passed SB 154, which will allow betting on collegiate and professional sporting events as well as horse racing on the tribal lands of the Eastern Band of Cherokee Indians in Western North Carolina. This bill is awaiting action by the Governor.

Additionally, a bill that would establish a statewide Gaming Commission in North Carolina has passed the House and is pending in the State Senate. Under the bill, the Gaming Commission would oversee gambling and other activities in North Carolina including the state lottery, bingo, raffles, and boxing. NC Family worked hard to get a section of the original version that would have legalized online Daily Fantasy Sports gambling, removed from the bill. Another provision that would have directed the Gaming Commission to study the use of Video Lottery Terminals—which are essentially video poker machines—in conjunction with the state lottery, has also been removed.

Finally, NC Family has been closely monitoring the Farm Act of 2019 because a major component of this bill focuses on the growing hemp industry in North Carolina, including the production of rope, clothes, fibers, and products that contain CBD oil, which is extracted from the hemp plant. It has come to light recently that a significant and highly profitable segment of hemp production is smokable hemp flowers. In essence, hemp plants look just like marijuana but do not contain the high levels of THC, the hallucinogenic agent that exist in marijuana. Reportedly, hemp products are smoked as a means of delivering CBD, which is said to have beneficial effects by those who use it.

According to testimony from sheriffs, district attorneys, and other law enforcement officers, it is nearly impossible to tell the difference between the two plants. In fact they have testified that if the sale and consumption of smokable hemp remains legal, it will have the practical effect of legalizing marijuana across North Carolina, because someone who is caught with marijuana could simply claim it is hemp and law enforcement would lose the probable cause necessary to make an arrest. The current version of the Farm Act would ban the sale and use of smokable hemp in December of this year, however, it is unclear what the future holds for this bill.

For more information about the difference between hemp and marijuana and CBD and THC, be sure to read the feature article in the latest edition of Family North Carolina magazine, which you can access on NC Family’s website at NCFamily.org.