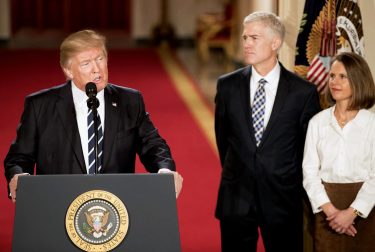 Conservatives are praising President Donald Trump’s choice of Judge Neil Gorsuch to succeed the late Justice Antonin Scalia on the United States Supreme Court. Reactions among pro-family and pro-life groups are favorable to Judge Gorsuch, who has world-class academic and legal credentials. He received his undergraduate degree from Columbia University, his law degree from Harvard, and his doctorate from Oxford. He clerked for the U.S. Court of Appeals for the District of Columbia Circuit and for the U.S. Supreme Court, and he is currently a judge on the U.S. Court of Appeals for the Tenth Circuit.

If confirmed, Gorsuch would be the first former law clerk to serve on the bench alongside his or her old boss. He would also be the only Protestant currently serving on the U.S. Supreme Court. Judge Gorsuch sided with Hobby Lobby and the Little Sisters of the Poor when both of those religious freedom cases came before the Tenth Circuit.

Legal experts say Gorsuch is a natural successor to Scalia in judicial interpretation and witty thought. In a Facebook post from January 27, Robert George, the McCormick Professor of Jurisprudence at Princeton University—and widely acclaimed thinker in social conservative circles—issued the following praise for Gorsuch: “He would be a superb Supreme Court justice. He is intellectually extremely gifted and is deeply committed to the (actual) Constitution and the rule of law. He will not manufacture ‘rights’ or read things into the Constitution that aren’t there or read things out of the Constitution that are.” Professor George’s reaction to the nomination and introduction of Gorsuch in today’s Washington Post is worth reading.

Gorsuch has written a book entitled, The Future of Assisted Suicide and Euthanasia. A quote from that book reads: “To act intentionally against life is to suggest that its value rests only on its transient instrumental usefulness for other ends.” Gorsuch is also quoted as saying there is “no Constitutional basis for preferring the mother’s liberty interests over the child’s life.”

It seems he takes very seriously the fact that Supreme Court justices swear an oath to uphold the Constitution. In his nomination acceptance speech last night, Gorsuch noted that it is the duty of Congress—not the Courts—to create laws.

Senate Republicans have assured President Trump that his Supreme Court nominee will be confirmed. Democrat reaction is split as to whether there will be an effort to delay or prevent Gorsuch from being confirmed in a timely manner. Gorsuch received unanimous support from the U.S. Senate when he was nominated to serve on the Tenth Circuit a decade ago.