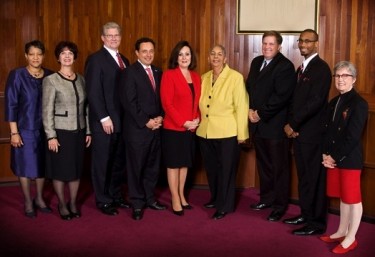 Last week, the Greensboro City Council (pictured) voted to add special protections for “sexual orientation,” “gender identity,” and “gender expression” to the municipality’s Fair Housing Ordinance, making it the first city in North Carolina to adopt such a policy. According to the Greensboro News & Record, the city council also voted to add these terms to the list of enumerated categories in Greensboro’s existing nondiscrimination ordinances covering employment and city services. The proposal, furthermore, directs the city manager “to conduct a review of all City facilities that contain restrooms, lockers, and changing rooms to evaluate the creation of a Privacy Restroom, Locker or Changing Room that will be available for both individuals and families on a gender neutral basis.”

Ever since a federal court forced North Carolina to legally recognize same-sex unions last fall, homosexual advocacy groups have been working overtime to push cities and counties to adopt nondiscrimination policies and ordinances that create special legal protections on the basis of “sexual orientation,” “gender identity,” and “gender expression.” Equality NC reportedly worked with the national homosexual advocacy group Human Rights Campaign on the policy changes in Greensboro, and both groups have been involved in similar efforts in Charlotte and elsewhere.

In other cities and states across the U.S., pro-homosexual anti-discrimination policies, like the one adopted in Greensboro, have been used to silence or punish people of faith. The victims are often small business owners, including florists, bakers, photographers and bed-and-breakfast owners, who have deeply held religious beliefs about marriage being only the union of one man and one woman. While these businesspeople have no personal animus toward individuals who engage in homosexual or lesbian relationships, they do not believe it is proper for the government to force them to provide professional services in a manner that celebrates or condones those relationships.

Forcing property owners to rent their own property to same-sex couples, including rental homes or even a room over a garage, will inevitably result in some of these individuals being forced to either violate their religious beliefs or go out of business. Alliance Defending Freedom, a non-profit legal organization that advocates for the right of people to freely live out their faith, has represented many individuals who have faced these kinds of attacks and has chronicled many of their stories.