A Flagrant Case of Media Bias: A Case Study 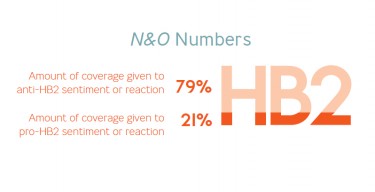 For months now, stories about House Bill 2 have dominated The News & Observer in Raleigh. According to an analysis conducted by NC Family staff, the newspaper published 161 stories and nearly 94,000 words during the first 35 days after HB2 was passed into law on March 23, 2016. That’s an average of more than four stories and 2,400 words per day! This amount of coverage for a single action by the NC General Assembly in itself is astonishing, but more astounding was the amount of bias we discovered.

To those of us who support the law, it appeared that most of the coverage in The News & Observer (N&O) portrayed the law as hateful, radical and unpopular. But was that simply our perception, or the truth? We decided to take a closer look. We examined all of the stories posted on the N&O website during that time period in an attempt to quantify whether this bias actually existed. When we looked at the results, we were amazed at the extent of the bias and the obvious lack of any attempt to portray both sides of this complex and emotional issue.

Our Findings
Our simple content analysis found that 79% of all N&O coverage during the first month following passage of HB2 illustrated a strong anti-HB2 sentiment. A meager 21% portrayed pro-HB2 sentiment.

But of course, fairness is not all about word count. So, we identified and searched for three key facts or clarifications that N&O reporters could have included to more fully explain why people support HB2. Out of a total of 93,960 words, only 1.7% (1,613 words) were devoted to these important facts! (Please see Our Methods & Findings.)

This is more astounding when you consider that there is widespread support of HB2 in North Carolina, particularly regarding the bathroom provision. Since the passage of HB2, there have been at least seven reputable polls released to the public. These all illustrated a North Carolina that is divided on the issue. Of these seven polls:

These numbers clearly illustrate that North Carolina remains divided, with widespread opinions on both sides.

A Tale of Two Rallies
This slanted reporting was most clearly present on Monday, April 25. The General Assembly had just convened for the 2016 Short Session of the Legislature. That day featured two rallies: one in support of HB2 and one in opposition. HB2 supporters numbered in the 2,000-3,000 range as illustrated by aerial photography. Anti-HB2 protestors totaled fewer than 1,000. This was not fairly or accurately reported by the N&O. On the contrary, N&O stories promoted—even celebrated—the outcry to repeal HB2, featuring videos, pictures, and stories about the rally and related activity in opposition to HB2, with very little attempt to provide coverage about pro-HB2 attendees or activities. The N&O only had one story that featured the thousands of citizens from all across the state who came to Raleigh on a workday to show their support and thankfulness for the measure. The N&O headline read, “Hundreds rally near NC Legislative Building to support HB2.” The picture that accompanied the story clearly shows thousands. Another story that day featured an extensive description of all the activities of those opposed to HB2 and included only one sentence about support, which said, “A rally earlier in the day on the opposite side of the building, on Halifax Mall, drew a large crowd of HB2 supporters.” This pattern is repeated in most of the N&O coverage of HB2; it was quite common to have nothing or simply one line that mentioned supporters within a long, descriptive article on anti-HB2 activities.

A real low point on the N&O’s coverage of HB2 was the story, “Raleigh’s Lake Boone Chicken blasts HB2,” featuring a stuffed chicken that sits on a rock outside a home in Raleigh. This 400-word story, complete with two pictures, demonstrates the lengths to which the N&O staff went to find new, creative ways to blast HB2. If only they had put a little bit of their creative juices to work to find and interview just a few of the reasonable and respectable people who support HB2.

On a related note, NC Family received quite a few requests from foreign journalists hoping to find and interview people who support HB2. “It’s easy to find the ones who oppose it,” we were recently told. We tell these reporters that the HB2 supporters are out there; the polls clearly show they are. However, they have been so vilified and mocked by the anti-HB2 forces and the media, that most have taken to quietly contacting their representatives and the governor, encouraging them to stay the course. The news media, as illustrated by this case study of the N&O, has been complicit in the silencing of people who hold a view that differs from their own.

Exploring Possible Motivations
If support/opposition remains divided on HB2, why has the N&O refused to report it that way? Let’s explore a few possibilities.

According to the polling results, unless North Carolina is made up of a majority of ignorant and hateful people, there are actually quite a few intelligent and compassionate people who support HB2. Those people deserve to have their voices and opinions presented. It is the job of our community journalists to find and present those stories—particularly if their point of view is being underrepresented. The N&O failed in their responsibility to fairly present both sides of this contentious issue, and our state’s reputation is the poorer for it.