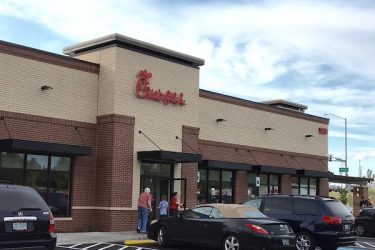 I’ve long admired Chick-fil-A’s slogan, “We didn’t invent the chicken, just the chicken sandwich,” because it cleverly acknowledges two fundamental ideals: (1) the restaurant chain’s focus on leading the fast food industry in the production of an excellent (and delicious) chicken sandwich, and (2) the presumption that someone else (i.e. the Creator God) actually “invented” the chicken. Of course, we know from its very beginning that founder Truett Cathy centered his company’s corporate philosophy on Christian principles, including famously remaining closed on Sundays in order to honor the Sabbath and to allow his employees a day of rest and worship. To this day, the company’s stated “Corporate Purpose” is, “To glorify God by being a faithful steward of all that is entrusted to us and to have a positive influence on all who come into contact with Chick-fil-A.”

This is a primary reason why Chick-fil-A has gained such a loyal following among Christians and other people of faith across our nation. We admire a company that produces an excellent product, provides excellent customer service, and remains committed to timeless Biblical principles—like closing on Sunday—despite immense cultural pressures and potential harm to the bottom line. In fact, these are the exact qualities that have served to separate Chick-fil-A from the corporate America fast food pack, making it the third largest restaurant chain in the U.S. with annual sales topping $10 billion.

This is also why it was so incredibly disturbing and disappointing to hear of the announcement earlier this week that the Chick-fil-A Foundation would be eliminating some of its current donations as it was “introducing a more focused giving approach to provide additional clarity and impact with the causes it supports,” namely “in the areas of education, homelessness and hunger.”

While these causes are unquestionably noble, within the public statement was an apparent policy decision that the Chick-fil-A Foundation will no longer give to certain faith-based organizations like the Salvation Army and Fellowship of Christian Athletes. Not surprisingly, the mainstream media quickly pounced and declared a huge victory for LGBTQ forces. In their assessment, pressure tactics worked by compelling the fast food giant to turn its back on organizations the far left has vilified as “hate groups” because of their support of biblical marriage and sexuality. Of course we all know the Salvation Army and Fellowship of Christian Athletes are the antithesis of “hate” and do incredible work in the arenas of education, homelessness and hunger.

Much has been said in response to Chick-fil-A’s announcement. The links below are to commentaries written by several of NC Family’s national ministry partners including Focus on the Family, the Colson Center, Family Research Council, and the Southern Baptist Convention. I encourage you to read each of them, as these leaders offer keen insights into this situation.

As Truett Cathy apparently recognized, we are all accountable to the God who invented the chicken, because He is the same God who “invented” each and every one of us. While this action by Chick-fil-A has been a great disappointment to many, it is important that we remain steadfast in our commitment to following Biblical Truth and to living every aspect of our lives in a way that brings glory and honor to God.