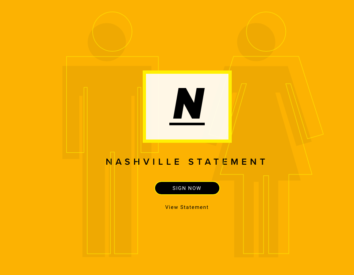 Prominent Evangelical Christian leaders across the nation have banded together to issue a bold clarifying statement regarding what the Bible says about human sexuality. NC Family President John Rustin joined the long list of signers to The Nashville Statement saying, “God is both love and truth. As earnestly as we desire to show love to all, including those who disagree with us, we also recognize our responsibility to boldly speak the Truth of God into our culture and in the face of increasing hostility to His Holy Word.”

The Nashville Statement is the brainchild of the Council on Biblical Manhood and Womanhood (CBMW). Its president, Denny Burke explained, “The spirit of our age does not delight in God’s good design of male and female. Consequently, confusion reigns over some of the most basic questions of our humanity. The aim of The Nashville Statement is to shine a light into the darkness – to declare the goodness of God’s design in our sexuality and in creating us as male and female.”

The statement is made up of a preamble and 10 articles, which speak to a variety of aspects of human sexuality and relationships. Each article affirms a Biblical position on one of these aspects and denies a contrary cultural position. The Nashville Statement specifically addresses issues such as: God’s design for male and female, marriage between one man and one woman, sex outside of marriage in any form, and homosexuality and transgenderism.