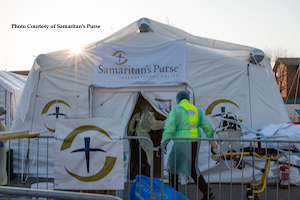 This article originally appeared in Family Research Council’s “Washington Update” on April 14, 2020. All credit is given to FRC and Tony Perkins for this content.

When Franklin Graham set up a 68-bed field hospital in the middle New York City’s Central Park, he didn’t hang a sign saying, “Christian Patients Only.” But somehow, the state’s extremists think it’s okay to demand only pro-LGBT caregivers on his staff. Samaritan’s Purse, liberals argue, isn’t tolerant enough to treat the sick. In a tweet so offensive it’s difficult to believe he holds public office, New York State Senator Brad Hoylman (D) said, “It’s a shame that the federal government has left New York with no other choice but to accept charity from bigots.”

What a luxury it must be to criticize people in the trenches, while you sit in the safety of your home. Samaritan’s Purse is risking its volunteers’ lives to be on the front lines, at great expense to the organization, treating whomever the hospital sends them. Do you think these patients, a lot of them in desperate need of help, care who their doctors voted for in the last election? No. They just want to survive — like the other 110,000 people infected in New York City.

If Senator Hoylman is so worried about politically-correct care, then where is his relief effort? The truth is, the only reason he has time to attack Franklin’s virus responders is because his colleagues aren’t on the ground meeting New Yorkers’ needs. But then, that’s what we’ve come to expect from the far Left. These liberal activists are more concerned about their agenda than actual people. We’ve seen it in the adoption debate, the foster care debate, and now in the medical debate. If the choice is between a Christian organization helping someone or the person getting no help at all, we already know what they’d choose: children without homes and patients without care.

To his credit, Franklin fired back at the critics, arguing that now was not “the time or the place to wage this debate.” If the Left wants to stand around pointing fingers while Americans die, that’s their business. But stay out of the church’s.

“Samaritan’s Purse is a decidedly Christian private relief organization, funded almost entirely by individuals around the world who share our passion for providing aid to victims of war, disease, disaster, poverty, famine and persecution — and doing so in Jesus’ Name. It seems tone-deaf to be attacking our religious conviction about marriage at the very moment thousands of New Yorkers are fighting for their lives and dozens of Samaritan’s Purse workers are placing their lives at risk to provide critical medical care.”

It’s true, he said, that his paid staff subscribes to a Statement of Faith, “but we have never asked any of the millions of people we have served to subscribe to anything… [W]e do not discriminate in who we serve. We have provided billions of dollars of medical care and supplies, food and water, and emergency shelter without any conditions whatsoever. Our Christian faith compels us — like the biblical Good Samaritan — to love and serve everyone in need, regardless of their faith or background.”

“In a country that cherishes freedom of speech and religion,” Franklin went on, “we don’t object to opposition or criticism of our beliefs as a Christian organization. What we do object to is being harassed into diverting precious resources of time and energy and personnel away from serving COVID-19 patients in New York City in order to respond to demands for documents and other information from eight Democratic members of Congress, the Human Rights Commission and the Reclaim Pride Coalition — all while the death toll in New York continues to climb. If any of these groups had funded and erected their own emergency field hospitals to serve COVID-19 patients in Central Park, we would join what we believe would be most New Yorkers — and Americans — in applauding and praying for them, not harassing them.”

The coronavirus isn’t a respecter of persons. It doesn’t ask how old you are, how much money you make, or what party you subscribe to. It just attacks. The people caring for these patients — the ones putting their lives on the line to help them — don’t ask questions either. They stand in harm’s way for everyone, no matter who they are. To them, there are far more important things at stake right now than politics. It’s a shame the far-Left doesn’t agree.