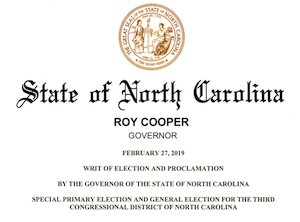 North Carolina Governor Roy Cooper announced the dates for the 3rd District special election process yesterday in a writ of election and proclamation. The recent passing of U.S. Congressman Walter B. Jones, Jr. left North Carolina’s 3rd Congressional District without a Representative, and it is left up to the Governor to call for a special election to fill the vacancy and set the dates.

Candidates must file notices of candidacy with the North Carolina State Board of Elections between March 4 and March 8, 2019. A primary election will occur on April 30, 2019, and the general election will be held on July 9, 2019. The candidate who is elected will “serve out the remainder of the current two-year term” for the 3rd Congressional District, meaning whoever wins must run again in 2020 should they desire to maintain the seat.

Governor Cooper’s press release concluded by stating that the State Board of Elections is responsible for scheduling the date of the new 9th Congressional District election, which the Board called for after an evidentiary hearing last week into absentee ballot fraud. The Board will meet Monday, March 4 to decide on dates for this new election.