Dr. Pat Fagan, Founder and Director of the Marriage and Religion Research Institute (MARRI), discusses the dramatic shift in western nations away from intact married religious families with children; why that shift matters, and what can be done to reverse this troubling trend. 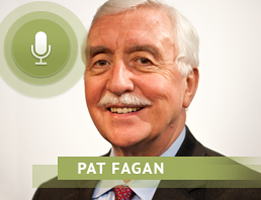 JOHN RUSTIN: Thanks for joining us this week for Family Policy Matters. Today, we’ll be discussing the dramatic shift we’re seeing in Western nations away from intact married religious families with children, why that shift matters, and what can be done to reverse this troubling trend.

Our guest today is Dr. Pat Fagan, Founder and Director of the Marriage and Religion Research Institute (MARRI) and publisher and editor of Marripedia.org.

Dr. Fagan, welcome to Family Policy Matters. It’s great to have you back on the show.

PAT FAGAN: It’s great to be with you again. Thank you.

JOHN RUSTIN: Dr. Fagan, as we look at trends in marriage and family across the globe, I sometimes hear the term “demographic winter.” As we begin our discussion today, share with us what this term means and why is it particularly relevant to what we see happening in a number of present day cultures.

PAT FAGAN: When you think of spring, summer, fall and winter: winter is the time when growth dies and there’s no growth; spring is when seeds start sprouting again; summer is where they flourish; and fall is where they’re harvested. Going into “demographic winter” essentially means, a bit like crops, we’re not growing our crops—We’re not growing the next generation. One of the most infertile regions in the world is Northern Italy, where the average fertility rate per woman, is 0.8 children, which means that [many] children don’t have brothers or sisters, and then the next generation, a lot of them don’t have aunts and uncles, and no cousins. Imagine growing up with no brother, no sister, no aunt, no uncle. The only people in your family are mom and dad and your grandparents, period. That’s demographic winter.

JOHN RUSTIN: Very interesting. Dr. Fagan, one interesting theory for a demographic winter is that there are really four main causes: low rates of religious practice; high social benefits; legacies of totalitarianism; and fiscal policies that penalize investment in people. Do you agree with this theory and can you help us understand what these factors really mean as we apply them to societies, especially those where we’re seeing such declines in rates of fertility and development?

PAT FAGAN: Low rates of religious practice is the first one. Here’s the numbers across the globe—and this is pretty universal across religions, not just within Christianity but outside it—there’s a huge difference in the fertility rates of women who worship weekly/attend their church, synagogue, mosque, temple, and those who don’t worship at all. And the difference is very big. On average across the globe, women who don’t worship have 1.2 children. Women who do worship have 2.4 children more, for a total of 3.6 on average, which is way above replacement for a nation.

The second thing: high social benefits. Now that means, where government puts the money and where governments—western governments have essentially put money into the elderly. (Social Security, Medicare, they are our two biggest, most expensive social programs by far.) And by contrast—except for education—that’s not put into the family with kids. And the cost of education is nothing like the cost of Social Security or Medicare. So that’s the investment is being made on the wrong end.

Legacies of totalitarianism was the third factor. And you just look at totalitarianism—China and all the former USSR, you know the countries behind the Iron Curtain—every single one of them, to this day, are still suffering the consequences of that.

And then the last one: fiscal policies that penalize investment in people. One of the biggest examples of that is in the United States. Who gets the biggest tax breaks? The rich. What do they get it for? Businesses. That’s investment in business. Now I’m not against that. In fact, it makes lots of sense. But, do you get big tax breaks when you have more kids? No. Actually, we’ve been lessening those in recent years. So that’s again where we’re investing in the wrong end. We’re investing in things rather than people.

PAT FAGAN: There’s a couple of things that happen. When people go to church, first of all, they’re getting out of themselves. They’re going to worship God. People who do that tend to be more cognizant of right and wrong. The other thing is, they tend—and this is across all sorts of measures: They’re more generous; they’re getting out of themselves; they give more to the poor; they volunteer more; they do lots more good; they get involved in associations for the common good; and they have more kids. They see the eternal benefit—the everlasting benefit—of bringing a child into existence, of giving life. There’s no bigger gift you can give—and people who go to church are more inclined to give gifts. There’s no bigger gift you can give than to give life to a being that does not exist and after you give birth is going to exist for all eternity. And religious people are much more aware of that. So, you put those factors together, […] there’s some of the reasons that push people in that direction.

JOHN RUSTIN: Dr. Fagan, this might be apparent, but why is fertility and population so important to the health of a society?

JOHN RUSTIN: To what do you attribute the decline in the United States—of a declining population, and for that matter, the rate of intact, married, religious families that are so important to the health of society?

PAT FAGAN: Of course, the single biggest factors—two big factors and they’re interconnected: contraception and abortion. Contraception, by its very nature, is limiting fertility. And that has become very widespread, almost universal. The second thing that’s limiting the growth of the population is abortion. We would be at replacement in the United States—so too would Europe be at replacement—if they did not abort. That would keep us at a level fertility. And then contraception, which explains lots of other things, also explains that. And of course, when you look at the history of abortion and contraception, first essentially came widespread use of contraceptives. With the growing use then of abortion because babies are conceived out of wedlock by a man and a woman who have no intention of getting married, and didn’t want to. And now they have this baby here. What do we do with it? Then the temptation to abort grew. First, the Supreme Court ruled and gave permission for the sale of contraceptives to unmarried people, taking sex and contraception outside of marriage. And then, of course, along came all these unwanted babies. And a couple of years later, you have Roe v. Wade giving the universal right to abort. So, the two things are connected and they have huge effects on fertility.

JOHN RUSTIN: Certainly, that begs the question: How can we restore the religious worship and sexual mores that are so necessary for the continuation of prosperous Western civilization?

PAT FAGAN: First, go back to the church. Prosperous Western civilization—I don’t know what’s going to happen to Western civilization. I think the future of civilization lies in Africa and in the East because that’s where the fertility is. That’s where the people will be. So coming back, rather than Western civilization, let’s go to the church. How can we restore the faithful churches? Because even the faithful churches haven’t been totally faithful. Sex outside of marriage—you know the latest data on, this is Catholic and Evangelical mid-20-year-olds, still single, who go to church every week—So Millennials who are single, who go to church every week—This we would regard as the cream of the crop, um?—Today, on average they have had two sexual partners already outside of marriage. I think we are now in the Church, we are in times that are very similar to the situation Paul had in Corinth. When Paul brought Christianity to Corinth, he had a hard time. We’re surrounded with these, and we’re human. We fall into these things and other people affect us. So, I think the first order of business is the restoration of fidelity within the church. How’s that going to happen? The only way that’s going to happen is by deep prayer and people in the middle of their heart— right at the center of their heart—reconverting and following our Lord and confessing their sins, first to the Lord, acknowledging it themselves, and then confessing and seeking forgiveness, and then beginning to reform. And here I’m talking about those who go to church every week. That’s ground zero. Because if they don’t get it right, there’s no way those who come every couple of weeks—they’re really relying on people who come weekly to be close to our Lord. You know Christianity is caught—somebody put it. Rather than, you don’t catch them, they catch you. Essentially, people see it. They see the joy the holiness in your face, in your behavior, in the way you talk to them, the kindness, the love that only comes if we are dwelling with our Lord. So, that’s got to happen first among those who go to church every week. And then, those who go to church a couple of times a month, pull them in gradually through kindness, through love. That’s ground zero. If we pull that off then we’ll gradually, others will say, “I don’t know what they’re drinking but they’re so happy and we’re not happy. I want to find out what’s going on there because I want that.” And that’s what will start happening. But only if we’re faithful.

JOHN RUSTIN: That is a great challenge to all of us. And it really brings to light the connection between our faith and the culture. Dr. Fagan, before we depart for this week’s program, I want to give you an opportunity to let our listeners know where they can go to learn more about your research on this topic. I know that our discussion has certainly wetted their appetite. So, where can they go to get those?

PAT FAGAN: We’ve got two websites, but if you go to the first one you can get from there to the second. And our website is Marri.us and there it’s full of all the social science on family, on marriage, on demographics. You can get more data, more charts, more social science than you’ll probably get anywhere else on marriage, family and religion. And then there’s Marripedia—a bit like Wikipedia—is another way of getting to the same stuff. But you can get to the Marripedia through the first website which is Marri.us. And then we have The Weekly where we do three major social science findings that have come out on marriage, family and religion. And you can get that by just mailing us at marri.research@gmail.com.

JOHN RUSTIN: Excellent. Dr. Fagan, I want to thank you so much for your time and the great research that you do and your willingness to share that research so that we can better understand the importance of the many factors that we talked about today, on us individually, but also on our culture and worldwide. So, thank you so much and we’re very grateful for all the wonderful work that you do.

PAT FAGAN: It’s great to be with you. Thanks a million for having me.