AT ISSUE: Crouching At The Door 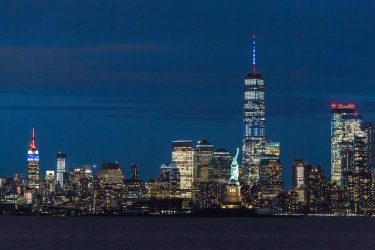 The image of New York State legislators and Governor Andrew Cuomo laughing and wildly applauding after signing a law that legalizes abortion up until birth is seared on my brain. I can’t get away from it. These representatives also erased from their state’s criminal statutes any penalty for violence against unborn children. As a consequence, if someone delivers a forceful kick to the stomach of a woman who is nine months pregnant in New York State and the baby dies, that person will be charged with assaulting the woman. No charges for the death of that child. In celebration of their achievement, the Governor ordered all of the state’s most beloved monuments to be lit up pink, including the 9-11 memorial. Weeks later, it’s still enough to make me sick to my stomach.

These radical abortion advocates had been filing similar laws in New York State every year for nearly a decade, to no avail—until enough pro-life lawmakers were voted out of office. Then, they acted quickly to strengthen the bill and push it through—on the anniversary of the historic abortion ruling, Roe v. Wade. The astounding symbolism was not lost on them or us.

What you might not know is that pro-abortion activists filed a similar bill last session in the North Carolina General Assembly. But because we have a strong pro-life contingent of lawmakers and pro-family advocates who work tirelessly day in and day out, that bill was never even considered in a committee. However, it’s good to remember that, just as in New York, these activists with their radical anti-life bills are crouched at the door, waiting for the numbers to swing their way.

This is our motivation as we write our email updates and articles for Family North Carolina magazine. We work hard to provide concise and understandable explanations of sometimes complex issues, which are often clouded by misleading information and conjecture. We want you to have the information you need to be active in promoting family-friendly public policy in our state.

In this issue, we tackle three topics that we hope will help you to communicate with your friends, neighbors, co-workers and lawmakers. Our main story is about the misinformation campaign being waged by those with a vested interest in seeing recreational marijuana legalized all over the country. Despite overwhelming evidence that this new brand of marijuana may be having terrifying effects on individuals and communities, many people still believe it’s harmless. We show you why it’s not.

Have you ever felt a paradigm shift in your thinking? Someone frames an issue in a new way and, all of a sudden, you see things from a completely different perspective. That’s the transformation that many have when they view some of our culture’s key issues with a “child-centric” lens. Katy Faust, founder and president of Them Before Us, shows how viewing marriage, divorce, abortion, in vitro fertilization and adoption through the lens of what’s best for the child, suddenly snaps each of these tough issues into focus.

Finally, we get an insider’s look at some very unique and counter-cultural groups that are popping up all over the nation. These groups facilitate the gathering together of people very different from each other to sit down across the table to talk. The goal is to create a national conversation that is less polarized and more productive. Alysse ElHage is a member of one of these groups and she explains how they work.

We hope you find these articles to be helpful. Feel free to pass this issue along to others, or send me a note if you’d like a few extras to hand out at church and to your family and friends.