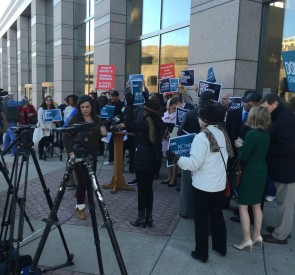 After an emotional debate last night, the Charlotte City Council will vote on a highly controversial “non-discrimination” ordinance, otherwise known as the “bathroom” ordinance, at its next meeting on February 22. As we have been reporting, this ordinance change could force businesses, schools, and other “public accommodations,” to allow men to use women’s restrooms based on their self-determined “sexual orientation,” “gender identity” or “gender expression.” It would also subject business owners, such as those involved in the wedding industry, to decide between violating their sincerely held religious beliefs or paying severe penalties and even shutting down their businesses if they do not embrace the legalization of same-sex marriage.

At the Council’s dinner meeting on February 8, members discussed whether or not to move forward with the amendment. Ed Driggs and Kenny Smith led the opposition to the amendment. Driggs expressed concern that the whole process was “divisive” and that “it’s going to exaggerate the hostility.” He also stated concerns that the amendment was “an uncompromising adoption of something that is totally geared towards the needs of one group and does not reflect the reservations of other people.”

Prior to the meeting, “Don’t Do It Charlotte,” a coalition of faith and business leaders opposed to the amendment, held a press conference voicing similar concerns. The group presented a petition with over five thousand signatures, urging the Council to vote against the amendment. Ultimately the Council voted 7 to 3 to put the proposed policy change on the agenda for its February 22 meeting.

Citizens across North Carolina are encouraged to contact the members of the Charlotte City Council (listed below) to urge them to vote against this harmful proposal. Although this specific ordinance change would apply only to the City of Charlotte, it will set a precedent for other municipalities and counties across the state to follow.

This measure was defeated last year because of the public outcry against it, and it can be defeated again as long as concerned citizens get involved!