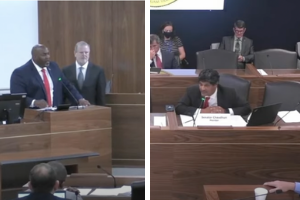 A bill designed to prohibit the promotion of highly contentious racial subject matter in North Carolina public schools passed the State Senate this week, but only after sparking major partisan fireworks along the way. HB 324—Ensuring Dignity & Nondiscrimination/Schools is intended to ban the indoctrination of students in concepts like critical race theory and other related controversial ideologies in our state-run schools.

North Carolina Lt. Gov. Mark Robinson established the F.A.C.T.S. Task Force (Fairness and Accountability in the Classroom for Teachers and Students) several month ago to provide a forum for parents, teachers, students, and others to report incidents of indoctrination and other activities of concern in schools. Robinson and Sen. President Pro Tempore Phil Berger (R–Rockingham) presented the task force’s findings as evidence to support the need for HB 324.

The John Locke Foundation captured a heated debate in the Senate Education Committee where Sen. Jay Chaudhuri (D-Wake) referred to the measure as a “Fox News-driven issue that’s more about fear mongering and has turned into a fishing expedition of our public school teachers.” Lt. Gov. Robinson fired back at Chaudhuri, “We didn’t hide in the dark and do this task force thing, and we didn’t ask to do it. The parents, teachers, and students of North Carolina demanded it! And to sit here and call it a Fox News-driven issue, when I have stood with teachers who have cried because they feel like their jobs and livelihoods and professions have been threatened, for you to call it that is an insult, an absolute insult!”

The bill, which passed the Senate on a 25-17 party line vote, states that it is the intent of the General Assembly, “that students, teachers, administrators, and other school employees respect the dignity of others, acknowledge the right of others to express differing opinions, and foster and defend intellectual honesty, freedom of inquiry and instruction, and freedom of speech and association and that the public schools of North Carolina employ teaching methods and procedures to further that intent.”

The bill now returns to the House to consider changes made in the Senate. HB 324 passed the House in mid-May on a party line vote of 66-48.