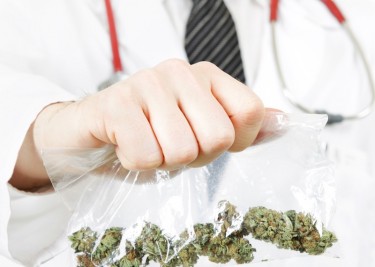 At one of Colorado’s over 500 licensed “medical” marijuana centers, customers with state-issued patient cards can choose from a variety of pot-infused “edibles,” including chocolates, granola bars, lotions, lip balms, lollypops, and cookies. A frequent customer told a local news station he spends between $600-$700 a week on marijuana products to treat chronic headaches. While “medical” marijuana has been legal in Colorado for over a decade, under a 2012 ballot initiative that took effect last year, adults can legally purchase marijuana for “recreational” use at one of the state’s more than 300 licensed retail “pot shops.” According to a February 2015 government report, marijuana retailers in Colorado sold nearly 40,000 pounds of pot in 2014, including over $2.8 million in edibles, some of which are finding their way into the hands of children.

This February, Alaska joined Colorado, Washington, and Oregon to become the fourth state in the nation to move from allowing “medical” marijuana to legalizing marijuana for recreational use. Despite the objections of the U.S. Congress, a similar law recently went into effect in the District of Columbia. Nationwide, 23 states plus D.C. allow “medical” marijuana.

A string of mostly ballot box victories in nearly half the states has drug legalization advocates feeling somewhat confident that marijuana will be legal nationwide in the near future. In North Carolina, their sights are set on the first step toward normalizing pot in the Tar Heel State—convincing lawmakers to legalize “medical” marijuana, which is the purpose of at least two bills introduced in the 2015 legislative session—House Bill 78 and House Bill 317. Rep. Kelly Alexander (D–Mecklenburg), who is a primary sponsor of both bills, told The Charlotte Observer that marijuana legalization in North Carolina is “as inevitable as high tide every morning.”

Before North Carolina buys into the marijuana lobby’s PR message that pot is a “harmless” and legitimate “medicine,” lawmakers would be wise to consider the impact of legalization in states like Colorado, which was one of the first to legalize the drug for “medical” and recreational use in 2000 and 2012, respectively. As such, Colorado is a literal “testing ground” for marijuana legalization that offers other states a glimpse into the individual and societal impacts of commercializing pot.

During an October 2014 political debate, Colorado Gov. John Hickenlooper (D) described his state’s rush to legalize marijuana for recreational use as “reckless.” On a CNBC talk show, the governor said, “If I could’ve waved a wand the day after the election (when the ballot measure passed), I would’ve reversed the election and said, ‘This was a bad idea.’”

Hickenlooper’s regret is well founded. Colorado’s marijuana policies have led to alarming increases in child exposure to marijuana, marijuana-related traffic fatalities, adolescent consumption of the drug, and the trafficking of marijuana to other states.

Child Exposure. In Longmont, CO, a two-year-old girl was hospitalized after eating a potinfused cookie she found in front of her apartment. In Sterling, CO, after a two-year-old boy who died in a house fire tested positive for THC, authorities discovered that his parents—both “medical” marijuana users—had encouraged the toddler and his five year-old brother to smoke pot.

Far from isolated incidents, these examples highlight what Colorado authorities describe as a growing trend of marijuanarelated exposures to children in the state. According to a study by the Rocky Mountain High Intensity Drug Trafficking Area (HIDTA), “marijuana-related exposures to children ages 0 to 5 on average increased 268 percent from 2006–2009 to 2010-2013.” More recently, the Colorado Department of Public Health reports a threefold increase in hospitalization rates for children with possible marijuana exposure for January to June 2014, compared to 2010-2013.

Many of these children end up at the hospital after ingesting their parents’ marijuana-infused edibles that without packaging are impossible to distinguish from regular candy or food. According to Smart Approaches to Marijuana (SAM), marijuana edibles “often contain 3 to 20 times the THC concentration recommended for intoxication.” Marijuana-induced emergency symptoms include severe nausea, vomiting, anxiety, and elevated heart, blood, and respiratory rates.

Colorado is not the only legal marijuana state where more young children are accidently ingesting pot. A study published in 2014 in the Annals of Emergency Medicine found “a statistically significant increase in calls to poison control centers for unintentional ingestion of marijuana by children in states that have legalized medical marijuana.”

Impaired Driving. Road safety advocates are also worried about the impact of marijuana legalization on traffic safety. Other than alcohol, marijuana is the most prevalent drug found in impaired drivers, with short-term effects that include slowed reaction time, impaired motor coordination, and altered decision-making. According to the HIDTA:

Youth Consumption. In February 2015, nine students at Coal Ridge High School in Colorado were arrested for distributing and consuming marijuana edibles, which they paid a 21 year-old man to purchase from a local dispensary.

Similar to other states that have legalized marijuana, Colorado is also experiencing increased use by adolescents, who obtain pot from their parents, older friends, or Colorado’s flourishing black market, and then bring it to school. For example:

Concerns about the negative impact of marijuana on adolescent health and development led the American Academy of Pediatrics (AAP) to reaffirm its opposition to marijuana legalization in January 2015. According to the AAP, these harms include: impaired memory/concentration; lower odds of completing high school or college; altered motor control, coordination, and judgment; psychological problems; poor lung health; and a “higher likelihood of drug dependence in adulthood.”

Drug Trafficking. Experts also warn that a “new” black market is flourishing in Colorado through the illegal diversion of “medical” and recreational pot to other states. Tom Gorman, director of the HIDTA, told the Denver Post that, “In a lot of ways, [Colorado’s] legal industry has become the black market for other states.”

According to the HIDTA, there was a 397 percent increase in “interdiction” seizures of Colorado marijuana headed to 40 other states, including NC, between 2008 and 2013 (from 58 to 288). Postal inspectors seized 493 pounds of pot mailed from Colorado in 2013, compared to over 57 pounds in 2010. Colorado is facing legal challenges to its recreational marijuana law from at least three neighboring states.

In February 2015, nine former DEA administrators signed an amicus brief to the U.S. Supreme Court in one lawsuit filed by Oklahoma and Nebraska that seeks to overturn Colorado’s marijuana law. In it, they argue the law “has already drained the plaintiff States’ resources and imperiled the lives, health, and well-being of their citizens,” and that “these injuries will only continue to mount as long as Colorado authorizes the injection of a dangerous substance into the stream of commerce.”

It can be tempting to look at the handful of states that have legalized marijuana for recreational use as “extreme examples” that have little to no impact on the rest of the nation. But as Dr. Kevin Sabet, former senior advisor to the White House Office of Drug Control Policy, points out, “The legalization of marijuana is not implemented in a vacuum,” but has consequences for “all Americans.”

North Carolina will undoubtedly remain a key target for marijuana legalization. But state lawmakers should heed the red flags in Colorado, which followed the marijuana lobby’s script of “medical” marijuana first, then full blown legalization, and is now reaping the consequences.

“Every day, we see the acute effects of the policy of legalization,” says Christian Thurstone, M.D., attending physician at Denver Health Medical Center. “And kids are paying the price.”