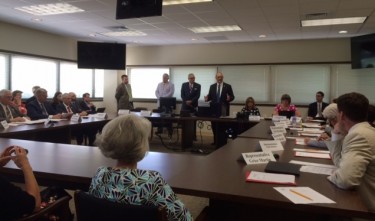 By a vote of 65 to 45 on Wednesday afternoon, May 27, the North Carolina House gave tentative approval to a bill that will help safeguard the religious liberties of certain public servants in North Carolina. SB 2-Magistrates Recusal of Civil Ceremonies would establish a legal right (1) allowing magistrates to recuse from performing marriage ceremonies, and (2) allowing assistant registers of deeds and deputy registers of deeds to recuse from issuing marriage licenses, as long as the recusal is “based upon any sincerely held religious objection.” The bill would also shield these public officials from punishment or disciplinary action for failing to discharge their duties, if the recusal is made in “good-faith.”

SB 2 was presented in the House Judiciary 1 Committee by Rep. Dean Arp (R-Union) earlier in the day, before it passed the committee by a voice vote (pictured). The measure then was brought to the House floor for consideration.

The House is expected to consider the bill on third reading during session on Thursday, May 28.