NC Family President John L. Rustin speaks with Mary Eberstadt, Author of the new book, It’s Dangerous to Believe: Religious Freedom and Its Enemies, which examines the rise of intolerance against Christians in our culture and why this is not only wrong, but potentially disastrous for the future of our nation. 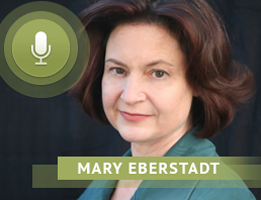 INTRODUCTION: Thanks for joining us this week for Family Policy Matters. Our guest today is Mary Eberstadt, an influential essayist and author. Her newest book, It’s Dangerous to Believe: Religious Freedom and Its Enemies, examines the rise of intolerance in our culture against Christians, and why this intolerance is not only wrong, but potentially disastrous for the well-being of our citizens and the future of our nation.

A frequent contributor to magazines and journals, including TIME, The Wall Street Journal, National Review, The Weekly Standard, and First Things, Mary has authored several books, including one our listeners may remember hearing about on this program, The Loser Letters: A Comic Tale of Life, Death, and Atheism. This book is a satire in the mold of C.S. Lewis’ Screwtape Letters, which has been adapted for stage and just finished a two-week run in Washington, D.C.

Mary, welcome back to Family Policy Matters, it’s great to have you on the show again.

MARY EBERSTADT: Thanks John! Thanks for having me.

JOHN RUSTIN: Mary, your new book is entitled It’s Dangerous To Believe. Explain for our listeners what you mean by “dangerous to believe” and what was the purpose behind your writing this book?

MARY EBERSTADT: I wrote the book in order to let religious believers know what’s going on out there. I have many pages of footnotes in the book about examples of how having religious beliefs, and in particular traditional Christian beliefs, now exacts social penalties, sometimes financial penalties, and other problems that Christians didn’t used to receive in this country. And this is not only an issue for the United States, it’s a civilizational issue. I really do believe we are at a turning point where Christianity is now being asked to explain itself and justify itself. Religious believers are on the defensive. And the reason I wrote the book is that if we are going to witness a great civilizational change like this, in which radical secularists want to chase Christianity out of the public square, then we should have a conversation about it and we shouldn’t let it be happening by itself.

JOHN RUSTIN: You talk about the bias, intolerance, and intimidation that American Christians face as a form of “soft persecution.” This is compared to the persecution that often leads to the martyrdom of Christians in other areas of the world. You mention particularly the genocide in areas of the Middle East and Africa. Is it fair for American Christians to complain about being driven from the public square, being fired from their jobs, being dragged into expensive legal battles, and being socially ostracized for their faith here, when fellow Christians are being martyred for their faith in other countries around the world?

MARY EBERSTADT: No one would say there is moral equivalence between what’s happening in the Middle East and what’s happening to Believers in better-off countries of the West. But just because they’re not being driven from their homes does not mean that Western Christians are in a good place. There are injustices being committed against them too and this hurts the efforts of Christians in the West to help embattled and persecuted Christians elsewhere. It hurts them because if they’re spending all their time on the homefront fighting legal battles or doing other kinds of rearguard things just to maintain their status as Western Christians, these are all resources that can’t be applied to the plight of persecuted brothers and sisters elsewhere. So these two problems are intensely related to one another. And that’s why it is not okay to say that Western Christians have nothing to complain about. They’re being hampered in their efforts to help others by the strain on their resources and everything else, because of this new intimidation.

JOHN RUSTIN: You’re absolutely right. And I know that you say in your book that the intensity of the current attack on religious belief has been propelled in large part by two recent events: One, the passage of Obamacare in the United States, and two, the United States Supreme Court’s decision in the Obergefell case, which legalized same-sex marriage in our nation. What exactly is the connection between these events and the religious persecution of the faithful in America?

MARY EBERSTADT: What the Obamacare decision went to show was just how far Progressives would go to pursue their agenda against traditional Christianity. The face of Obamacare is the Little Sisters of the Poor. These are indigent nuns who take in dying people, people who have been thrown away, who nobody else wants, and live with them as a family. It’s hard to imagine more self-sacrificing people than these. And yet when these people said, in good conscience, “I can’t go along with these requirements of Obamacare,” the Administration went after them, and is willing to impose millions of dollars and fines on a group like that, just in pursuit of this radical secularist agenda. So that’s one example of how far things have gone.

JOHN RUSTIN: Mary, we currently hear about a couple of terms: “freedom of religion” versus “freedom of worship.” The difference when we first hear these terms may seem subtle, but explain the significance between these two frames of thoughts, or approaches, and why it is so important for Christians to understand what these terms mean and how there are attempts to substitute one for the other in our culture today.

MARY EBERSTADT: The Obama Administration for two terms now has been switching out that phrase “freedom of worship” for “freedom of religion” and it’s a very important distinction here. Freedom of worship is something that you could do in your closet at home. Freedom of worship sounds exactly like something behind closed doors that you’re not supposed to carry out with you into the public realm. And it’s a very dangerous precedent to be narrowing the definition of what is permissible for Christians, in particular, to do. Freedom of religion, the freedom on which this country was founded, the first freedom, is a much more expansive idea and, the funny thing is John, when Christians act on their beliefs by, for example, giving more to charities that other people give—and all these other good works that are well documented in social science—nobody seems to ask them to go back into the closet for that. But if they take their unwanted traditional moral beliefs into public and defend them, they are then told by Progressives that they are exercising too much freedom. And I think we need to be very aware that freedom of religion is a much bigger idea than the freedom of worship that Progressives want to substitute for it in public documents and in the legal realm these days.

JOHN RUSTIN: Mary, there is a striking hypocrisy in today’s Progressive credo that seeks to crush all dissent and diversity of opinion in the name, ironically, of “tolerance.” Why is such blatant hypocrisy accepted today and what can we do about it?

MARY EBERSTADT: The first thing we can do is to be aware of what’s going on out there. I think one of the most critical battlegrounds—and it is a battleground—is Christian education. There are systematic efforts in this country by secularists to shut down Christian education. During the past 10 years, there have been 2 serious challenges to the accreditation of 2 major Protestant Evangelical colleges, Gordon College in Massachusetts and King’s College in New York. And in both cases, secularists went after these schools making them prove that they are worthy of accreditation. In both cases, the schools survived, but this is surely only a harbinger of things to come. I quote in It’s Dangerous To Believe for example, from an article written by a professor at the University of Pennsylvania, arguing that no Christian colleges should have accreditation because they are Christian. This is a very dangerous precedent. It is also dangerous to have people going after homeschooling, particularly homeschooling that is done by Christians. Now, John, you and I know that millions of families in this country homeschool their children and assume that they are free to educate their children as they see fit. But there are people out there, who are saying that Christian homeschooling shouldn’t be permitted in our democracy. So Christians need to be aware that there are people out there who are systematically working to reduce their freedoms to educate their children as they see fit and even to acquire a Christian education.

MARY EBERSTADT: That’s another great example of one of the themes in the book, which is the way in which, when push comes to shove, secularists, and by that I don’t mean all secularists, John, I think there is a hardcore of committed secularists who really do exist just to try and remove Christianity from American public life. But those people, every single time, will choose the sexual revolution over the needs of the poor. In the case that you’re describing, disabled students deprived of potential scholarships just because secularism can’t stand Christian schools. That is a perfect encapsulation of what I’m describing, which is the moral high ground not held by radical secularism. Radical secularism says, “To heck with the people who need help.” And we need to make this point forcefully out there because moral high ground is where the people are standing who are trying to help the disabled, the infirmed, the student who comes from a place where a scholarship will change his life, all of that kind of thing.

JOHN RUSTIN: Mary, you open your book, It’s Dangerous To Believe, with a quote from President Harry Truman, who said, “In a free country, we punish men for the crimes they commit, but never for the opinions they have.” You then go on to provide a laundry list of recent instances where Christians have been punished socially, professionally, and legally for their opinions. And you talk about the numerous Christians and parents who are now wondering how they will protect their sons and daughters from this growing hostility toward religious faith in our nation. Do you think this is a permanent change in American life or is there hope for the future?

JOHN RUSTIN: Unfortunately Mary, we’re just about out of time for this week but I know our listeners are wondering where they can go to get a copy of your new book, It’s Dangerous to Believe: Religious Freedom and Its Enemies. Could you direct them to where they could do that?

MARY EBERSTADT: Thank you John. It’s available on Amazon.com or from the publisher HarperCollins, and in bookstores, we hope.

JOHN RUSTIN: Excellent. I do want to encourage our listeners. This is, obviously, so well stated and heavily researched. This is a significant issue for Christians in our nation today and a growing concern and something that does need to be challenged. We need to be salt and light in our culture as we’re called to be, and speak God’s Truth in love, as Mary has charged us to do. So, I want to encourage our listeners to get a copy of It’s Dangerous To Believe.

And with that, Mary Eberstadt, I want to thank you so much for being with us on Family Policy Matters and for offering such a well-researched and well-written assessment of this current trial and challenge for Christian Americans. We certainly have a lot of work ahead of us, but in that battle we’re grateful for folks like you who use your talents and skills to help equip the rest of us for the battle. Thank you so much.

MARY EBERSTADT: Thank you for having me, John.