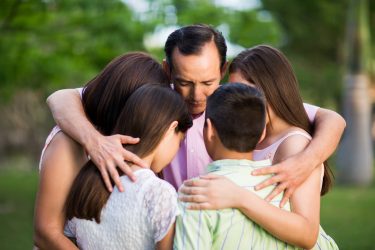 Have you ever been accused of bigotry for your support of traditional marriage?

In fact it was that very accusation in 2012, from both Facebook friends and the media at large that finally made this non-confrontational pastor’s wife… snap. That’s when it became clear to me that no matter how many gay friends you have or how well-reasoned your arguments or how compelling your own lived experience, if you didn’t support gay marriage you were the equivalent of a racist or a Nazi. As a woman who is very close to her mother and her mother’s partner, and who also recognized the irreplaceable value of my father’s presence in my life, I knew that there was no conflict between loving your gay family and friends and supporting traditional marriage.

When it comes to children, the mantra of the gay lobby is that mothers and fathers are optional. Having worked with kids for 20 years, I have never met a child who lost their mother or father who was not, at the very least, curious about their missing parent. Most of the time, however, their loss resulted in a life-long wound and struggles well into adulthood. Indeed, fatherlessness is a main contributor to every major social ill we are battling today including poverty, teen pregnancy, high incarceration rates, alcohol and drug use, mental health issues, behavioral disorders, and suicide. So I began writing about why marriage is a social justice issue for children.

Historically, marriage between a man and a woman has been the most child-friendly institution the world has ever known, and that is what the narrative around gay marriage fails to acknowledge. Government’s interest in protecting marriage is not simplistically about protecting someone’s love life. Marriage is protected by nearly every society throughout history because it unites the two people to whom children have a natural right—their mother and father. Growing up with married parents stacks the deck in a child’s favor when it comes to their physical, social and emotional health. It also happens to be what children want. How many kids experienced their parent’s death or divorce or abandonment and loved it? Right… zero. Yet, the push to redefine the family is predicated on the assumption that gender and biology are irrelevant to parenting. Instead we are told that kids simply need “love and safety.”

Once I began writing, other children with gay parents found me. Most were terrified to share their stories with the world, let alone their own families. Even so, they would share them with me.

“When I hit school I started to realize through observing other children and their loving bonds with their fathers that I was missing out on something special. I was lied to throughout school; I was told I didn’t have a father… it was very difficult for me to affirm a stable identity. And my behavioral and emotional stability suffered greatly because of it…” —Millie

Me, my baby brother, Dad, and [his partner] Billy [were] the only family I had ever known. [I watched] The Land Before Time. It was a traumatic experience. Littlefoot had a “Mother” and she died saving his life. Littlefoot spent the entire movie mourning the loss of his “Mother.” It was in that moment, as a 5 year old girl, that I realized there was such a thing as a mother and that I did not have one. I spent the rest of the day crying into the arms of a teacher I would never see again for a mother that I never knew I never had. —Samantha

“I yearned for the affection that my friends received from their dads. As far as I was concerned, I already had one mother; I did not need another. My grandfathers and uncles did the best they could when it came to spending time with me and doing all the daddy-daughter stuff, but it was not the same as having a full-time father, and I knew it. It always felt secondhand.” —Brandi

When the Supreme Court decided to legalize gay marriage for the entire country, it didn’t wipe away the hurt of children like these. What it did do was make it discriminatory for any governmental or political institution to recognize that children should be raised by their mother and father. Now these children will likely believe they are the ones who are wrong for their feelings, not the law itself.

The reality is, these kids are just like every other human child who longs to be known and loved by the two people responsible for their existence. And, they’re not alone when it comes to experiencing the pain of family breakdown. The children of no-fault divorce, abandonment, and those who have been intentionally denied a relationship with a parent via reproductive technologies experience the same pain. Turns out, none of these kids have ever had anyone officially advocating for their rights in family structure.

It’s time for that to change.

With the help of several other (adult) children who have experienced the loss of a parent whether by divorce, donor-conception or who have LGBT parents, I have founded the first-ever non-profit devoted to the defense of children’s rights in family structure. We are committed to highlighting the child’s perspective in the conversation around marriage, parenthood and family—in both the culture and the courtroom.

Until recently, our culture and laws have recognized that children have an innate right to their mother and father. When this right is violated, children become “items” to be cut and pasted into any and every adult romantic relationship. Of course, deadbeat biological parents and heroic step-parents exist. Yet studies reveal that children raised in households with a non-biological caregiver are more likely to be abused and neglected. Therefore, when both parents’ personal choices and our laws honor children’s rights to their mother and father, we stack the deck in favor of the next generation’s mental, physical, and emotional health.

Approaching today’s marriage and family issues through the lens of children’s rights brings the true problem, and solution, into focus. Here are a few examples:

Children thrive when they have daily connection with both their mother and father. Divorce forever disrupts the meeting of this need. It initiates what often becomes a lifelong cycle of transition and family disruption. Studies show that two homes, two sets of expectations, two new partners/spouses are not better than one. After divorce, sometimes children lose contact with one parent, usually their father, altogether. Children of divorce suffer increased rates of teen suicide, juvenile crime, declining school performance, teen pregnancy, mental health struggles; and it diminishes the likelihood of having a healthy, lasting marriage when they reach adulthood.

There are circumstances where divorce is necessary because one parent is responsible for ending the marriage due to abuse, infidelity or abandonment. In such “at-fault” cases, the courts should be able to rule in favor of the innocent spouse. However, approximately two-thirds of all couples with children that choose divorce are considered to have “low-conflict” marriages where domestic violence or emotional abuse is not a factor. Major reasons cited for divorce include poor commitment, arguing, lack of preparation for marriage, or feeling like the relationship is unequal. Our current model of “no-fault” divorce means that a marriage is easier to dissolve than a contract with your cable company. Sadly, “no-fault” divorce often gives the greatest power to the spouse who has the least investment in the marriage. It nullifies any legal protection of the “innocent” party because the court splits everything, from time with each child to allocation of each dollar, right down the middle.

A child-centric approach to divorce would be a return to the “at-fault” model of divorce, which encourages both parties to be faithful to the marriage and to their children. Extending mandatory waiting periods for unilateral no-fault divorce and subsidizing counseling for struggling couples have been shown to reduce divorce rates. Staying together “for the kids” actually is the best and most important reason of all to not divorce.

Sperm/egg donation and surrogacy can be confusing for conservatives. After all, we love babies, so any practice that produces babies must be good, right? Not when viewed through a child-centric lens. These technologies fundamentally violate a child’s right to their mother and father, and often their right to life as well. Here are some common practices involved when babies are created in the lab instead of the womb:

Infertility can be a crushing burden, but we should not expect children to sacrifice their rights so single, same-sex or infertile adults can possess the child they desire. A child-centric approach to reproductive technologies restricts any aspect of the practice which denies children their right to life or their mother and father.

Adoption is a redemptive and beautiful institution, but for the child, it always begins with great loss. Losing one’s biological parents and extended family creates a wound. Adoption is a just society’s attempt to mend that wound. A child-centric approach to adoption means no adult, whether heterosexual, homosexual, married or single, has a “right” to adopt. Rather, children who have lost their parents have the right to be adopted.

I once worked for the largest Chinese adoption agency in the world, and our mantra was “We aren’t here to find a child for every adult. We are here to find a family for every child.” That’s because placing children with unrelated adults is risky for children. Child-centric adoption means that prospective parents can and should undergo rigorous background checks, home studies, references, training and supervision. Adoption agencies need the freedom to evaluate all factors when they evaluate potential placements, including kinship bonds, gender and marital status, and readiness to care for the child’s special needs. Adoption is not a means for adults to “get kids.” It’s a way to find the right parents for children without any.

You’ll notice a common thread in all these child-centric approaches—adults are making sacrifices so that children’s rights and well-being are protected. Adults must work on their marriage so kids don’t suffer through a divorce. Adults must seek alternatives to reproductive technologies in the face of infertility. Adults should subject themselves to background checks and screenings through the adoption process so that children are assured safe placement.

And that’s exactly how it should be—adults sacrificing, so children don’t have to suffer needlessly. In a culture that worships at the altar of adult desire, that’s a radical and much-needed approach. It’s an approach that puts Them (the children) Before Us (the adults). And because all of society benefits when children’s rights are respected, it’s an approach that can restore our country.