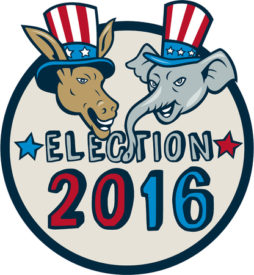 As anticipated, North Carolina played a prominent role on the national political stage this election year. On the Federal level, the Old North State was a key battleground in the presidential race and had one of the most competitive US Senate races in the country. At the state level, our Governor’s race received national attention, due to its competitive dynamic and prominence related to the passage of House Bill 2 earlier in the year. Millions of dollars and countless hours were spent by a multitude of groups and interests this year to try and influence the elections. Here is how all the races shaped up across the state. All results are unofficial until the final canvass is complete.

Republican Donald Trump won North Carolina, taking in over 2.3 million votes, which represents 49.9 percent of the vote. Democrat Hillary Clinton received slightly over 2.1 million votes and 46.13 percent of the vote. Interestingly, every presidential election in North Carolina since 1980 has been won by a Republican, with the exception of 2008 when Barack Obama won by just 14,177 votes.

Republican incumbent Senator Richard Burr easily won reelection, defeating Democratic challenger Deborah Ross by six percentage points. Most polls suggested this would be a surprisingly close race heading into Election Day. Some believed that an unfavorable atmosphere for Republicans along with an influx of outside money would help bolster Ross to victory, but in the end, Burr cruised into his third six-year term representing North Carolina in the US Senate. He has stated that this will be his last term and that he will not run for reelection in 2022.

The partisan make up of North Carolina’s representation in the US House remains unchanged after the election, as the state continues to be represented by 10 Republicans and 3 Democrats. Republican Ted Budd is the only newly elected member of our congressional delegation. He won the special primary in June, beating out a crowded field of GOP candidates in the newly drawn 13th District, and he easily defeated Democrat Bruce Davis in the General Election.

This race is still too close to call and will likely take weeks to resolve. Democrat challenger Roy Cooper currently leads Republican incumbent Pat McCrory by less than 5,000 votes.  There are currently over 60,000 provisional and absentee ballots that have yet to be counted. The vote totals including these provisional and absentee ballots will likely not be announced until the end of this week. If the final margin is still within 10,000 votes, Governor McCrory can call for a full recount.

In addition, Governor McCrory has filed a formal protest with the Durham County Board of Elections for “‘malfeasance’ in tabulating approximately 90,000 ballots using corrupt data from machines that suffered critical errors during early voting and Election Day.” The results of this race are fluid, and NC Family will provide an update as soon as any new information is available.

Lt. Governor Dan Forest cruised to an easy victory over Democratic challenger Linda Coleman. This was a rematch of a very close 2012 race, which saw Forest winning by less than 7,000 votes. This time around, Forest won by more than 300,000 votes taking 51.87 percent of the vote while Coleman took in 45.28 percent. Forest was instrumental in calling for the Special Session during which House Bill 2 was approved, and he has been one of the bill’s strongest supporters and defenders.

Superior Court Judge Mike Morgan defeated incumbent State Supreme Court Justice Bob Edmunds. Although NC Supreme Court races are nonpartisan, this race was a rare bright spot for state Democrats. The addition of Morgan, a registered Democrat from Wake County, tilts the partisan make up of the State Supreme Court to a 4-3 advantage in favor of Democrats.

Despite the Democratic victory in the Supreme Court race, Republicans won five seats up for election on the North Carolina Court of Appeals. Winners include incumbent Court of Appeals Judges Bob Hunter, Richard Dietz, and Valerie Zachary, as well as challengers Phil Berger, Jr. and Hunter Murphy.

NC Senate: Senate Republicans not only protected their veto-proof majority, but picked up an additional seat extending the partisan make up of the State Senate to 35 Republicans and 15 Democrats.

NC House of Representatives: House Republicans also protected their super majority despite losing four seats in Wake and Mecklenburg counties. These loses were offset by GOP victories in four mostly rural districts, keeping the  partisan make up in the State House at 74-46 in favor of the Republicans.