Yet Another David vs. Goliath Story 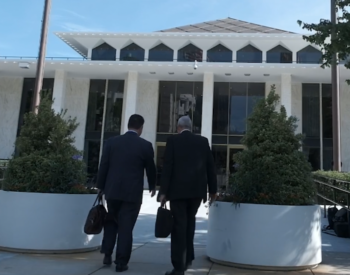 One of the greatest joys of serving at the North Carolina Family Policy Council is seeing God’s hand at work, especially as we face what appear to be nearly insurmountable odds. Just such an instance occurred earlier this year, when it seemed almost imminent that a bill to legalize sports gambling in our state would be enacted into law.

Supported by key leaders in both chambers of the General Assembly, as well as the Governor, this bill had passed the State Senate and four committees in the State House before making it to the House floor. An army of gambling lobbyists and bill supporters applied tremendous pressure to lawmakers on both sides of the aisle to pass the bill, and we knew the vote would be very close. Then, at the time of the vote, several of our needed “No” votes were absent. It seemed the cards were stacked against us.

But when the floor vote came, SB 688 was defeated by ONE vote!

In our June 27 article Sports Gambling Bill Fails On House Floor, we referred to the defeat of the bill as “a miraculous victory.” Looking back now, it is even more miraculous than we realized.

Since then, we searched the N.C. Secretary of State’s lobbying records to identify the number of companies, organizations, and individuals lobbying in support of gambling—from the gambling companies themselves, to the professional sports leagues, to other interests and potential beneficiaries. As best we can tell, that’s as many as 25 entities paid over 50 lobbyists. And friends, there’s no telling how much gambling money that represents.

The number of groups and interests arrayed against the bill? The N.C. Family Policy Council; the Christian Action League of N.C.; the N.C. Justice Center; former House Speaker Pro Tempore Paul “Skip” Stam; our supporters and a number of faithful pastors from across the state who contacted their lawmakers and urged them to oppose the bill; and those state lawmakers on both sides of the aisle who stood courageously in the face of immense pressure and arm-twisting to defeat SB 688.

This truly is a David vs. Goliath story, and God did, in fact, bring about “a miraculous victory.”

I share this story, because God made a way when there seemed to be no way! We know the legalization and expansion of sports gambling would devastate many individuals and families in our state who become caught up and victimized by gambling addiction. It would also invite corruption into our collegiate athletics and professional sports, not to mention into the halls of government. We thank God for the defeat of this bill!

I also share this story as a word of encouragement. The reality is that NC Family is often significantly out-numbered and out-financed as we seek to represent Biblical family values in the political and public policy arenas. However, we know that: (1) if we are faithful and show up, (2) if we humble ourselves and pray, and (3) if we work together, God can bring about the victory when the odds are stacked against us.

Help NC Family stand against today’s Goliaths and prayerfully consider a special gift to support our work! Through your generosity, we can remain on the front lines in the fight to promote the sanctity of human life; to protect religious liberty; to defend parental rights; to expand educational choice; to advance human flourishing; and, yes, to defeat the expansion of predatory gambling in our state.

You can partner with NC Family by making a generous ONLINE DONATION or by sending a check to:

Thank you for your faithful support and prayers!