NC Family president John Rustin talks with Bob Hall, executive director of the political watchdog group, Democracy NC, about the corrupt nature of the video sweepstakes gambling industry in North Carolina, and why state lawmakers need to reject any effort to legalize sweepstakes gambling in the Tar Heel State. 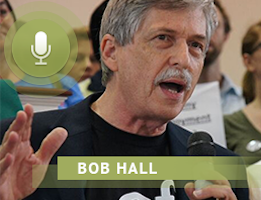 INTRODUCTION:  Bob Hall is executive director of the political watchdog group, Democracy North Carolina, which is based in Durham, North Carolina. He’s been involved in grassroots politics since 1970, and has served on numerous non-profit boards and governmental commissions, provided expert testimony in court cases, and consulted with officials in a dozen states on voting rights and campaign finance reform.

Although we don’t always see eye-to-eye on policy issues, the North Carolina Family Policy Council and Democracy North Carolina have worked together on a number of issues over the years, including reforming our state’s lobbying and ethics laws, as well as shining a bright light on the myriad of ills inherent with legal and illegal gambling.

Bob is with us today to talk about the corrupt nature of some of the players in the video sweepstakes gambling industry in North Carolina, and why our state lawmakers need to reject any effort to legalize this extremely predatory form of gambling.

BOB HALL: It is essentially the same thing, the industry has continually tried to morph themselves in to new ways of luring people in to gambling. The latest iteration called the sweepstakes—they’re the storefronts with computer terminals, and the software in them is now what controls the odds as to whether you win or lose. It used to be the freestanding consuls like an ATM machine that you would punch, and all the mechanisms were right inside that machine. Now these terminals, the computer terminals are wired often as in the case of this scandal we’re talking more recently, they’re connected to a software supplier, so there’s a little bit different in the machinery, but the bottom line is there’s still gambling and lots of flashing and lights to get you to spend money.

BOB HALL: It’s millions of dollars that they have invested in campaign contributions and tens of millions of dollars that they’ve invested in lawyers and lobbying to try to get their games legalized or protect them from being seized in one manner or another. I’ve been tracking as I have for a long time. I track campaign contributions, and you know the quid pro quo are donors seeking and getting something in return for the money they put into the system. That just corrupts the whole way our democracy works, and our organization and I personally, have been fighting that. So it was a pattern of donations that were concentrated, I mean I think I saw all the way back to the Mike Easley days when he was the Attorney General and made a ruling that made it difficult for sheriffs to go after the video gambling machines. And it was very suspicious to me, and looking and seeing that there was a whole lot of video poker money that went into his Attorney General campaign, and then he abandoned that money when it was exposed later on. Jim Black, the House Speaker, I was looking through his reports and saw a bunch of strange things and started calling people, and learned that they were straw donors, these were phony names that were put in the reports to mask actual video poker operators and we filed a complaint against the then House Speaker Jim Black. So, it’s been an ongoing thing.

JOHN RUSTIN: It’s an unfortunate thing but a piece of reality that our listeners really need to understand that this is an issue that the state has attempted to get rid of year after year but it continues to rear it’s ugly head there were bills actually introduced at the beginning of this legislative session that would have essentially legalized the sweepstakes gambling operations in North Carolina. Instead of seeking to crack down and get rid of these gambling operations, it would have legalized them, taxed them, attempted to generate revenue for the state as we’ve seen with the state lottery, and that sort of thing.

BOB HALL: That complaint we filed in 2013 after looking at the 2012 campaign reports and a story that came out of the Associated Press of a video sweepstakes. One of these software suppliers who is based in Oklahoma, he was arrested in Florida for the operations he ran there for illegal gambling, racketeering, money laundering, and so on. It turned out he was making contributions in North Carolina. As we discovered, he actually with the largest political donor in the 2012 election to state legislative candidates—he gave over $250,000, if you can believe that, and he’s from Oklahoma. He was trying to, exactly what you say, trying to get legalization of his industry. They want to be regulated, they want to be taxed, they want politicians to believe that that gives them money, if you’ll put us under your wing, if you’ll just protect this new framework where we’ll be legal. But he was using a trust account to make these political donations. The money came from his gambling corporations into that trust account. The checks were actually written by his business associates, by his administrative assistants, they would fill out the check. They followed a script of who to send the checks to from the lobbyists, [and] the lobbyist was contracted by the corporation. Our alleged complaint was that this was an indirect corporate contribution, which are banned in North Carolina. The corporation cannot just take money out of the treasury and give it to politicians. So that was a major part of our complaint, there were several other elements that we can talk about, but the Board of Elections eventually and they did a long investigation, they came up with a lot of interesting material, but in the end they … that account that was used to make the contributions was a personal account because it was associated with a social security number not with a federal employer identification number. We think that’s a very simplistic way to let the operation go scott free, and so we are definitely pursuing this now, to get the US Attorney involved, get the District Attorney involved, because we do think that it’s a corporate business enterprise operation that was being done here.

JOHN RUSTIN: I know you’ve done some research and I’ve heard his name come up multiple times when the sweepstakes issues arise, [but] I think for the benefit of our listeners it’s important to understand the ties and the depth of operations of this gambling industry. Talk a little bit, if you would, about the individual Chase Burns, what you know about him, his involvement in other states, and maybe a little bit more about his involvement in North Carolina.

BOB HALL: He is the owner of this company, the IIT, International Internet Technologies, and it’s based in Oklahoma. They provide the software that goes inside these computer terminal machines. They control the odds basically of how the winners and losers will be determined as they approach—as they get on that terminal machine. They service these mom and pop sweepstakes cafes that are all over North Carolina, Florida, Oklahoma, many states he operates in. The mom and pop operator pays them a percent of the take. And what he was doing in North Carolina, he would add on a three percent charge to the 25 percent that they had to pay, and that three percent was used to pay for lobbyists and pay for lawyers to help protect the industry when they would get arrested for their illegal operation, and then fight with lawyers through the chain of the court cases. So, it turned out that the three percent was almost 10 million dollars in North Carolina alone, which is to say that’s about 300 million dollars to get 10 percent as a three percent return. You know, you hit big money that they were investing. Again this was one of the things the board found, they found the roster of where that money went and who the lawyers were. One of the things that’s come up is one of the law firms that was hired to take court cases for Chase Burns was Kilpatrick Stockton, the partner in that firm. He was on the Board of Election during the investigation of our complaint, and did not recuse himself and actually got heavily involved in monitoring that investigation and prepping the board staff, and not telling them that he had a conflict of interest. It was very embarrassing for them, and he ultimately resigned. But you know overall the industry is they just have a tremendous amount of money to spend in this effort to gain protection.

JOHN RUSTIN: Bob, [give us] just a few additional examples of how you think the sweepstakes gambling industry has violated state and federal laws in North Carolina.

BOB HALL: One of the laws that is on the federal books is a thing called the Hobbs Act, which says that a person giving something in exchange for the favor of a public action by a public official can be a violation of bribery essentially, where they’re giving to the official with the expectation that they’re gonna get something in return, and (JR: and we refer to that as quid pro quo, correct?) the quid pro quo, yeah. And even if the quid is not given for the quo, there is still a violation that essentially the donor has been lured into giving the money with the expectation that they’re gonna get something. So that kind of transaction is a federal violation, and we [have] state statutes against bribery, against extortion and so on. The money laundering, it looks like this bank account, this trust account money came in the corporation and then it was used to invest in land operations, basically to clean up the money from being gambling money, to clean it up, putting it into real estate, putting it into other things, and then it became more personal money. But it was also used for political contributions. There are issues around taxes—are they paying their fair share of taxes? All this money is cashed and comes in, that’s one of the industry problems that the sheriffs and other law enforcement people will point to is just that when you have an industry like this with so much cash, you’re gonna see corruption.

JOHN RUSTIN: No doubt about it, and that’s why we have been working along with Democracy North Carolina, and other groups all along the political spectrum for years in North Carolina to continue to encourage our legislators to reject efforts to expand any form of legalized gambling, and also enforce laws against illegal gambling in North Carolina.

We appreciate so much your work on that and we stand by you. We were definitely pleased to see a number of months ago the US Attorney enter into agreements that essentially told many of these sweepstakes software companies to leave the state and that if they left the state by July 1st then the US Attorney would not prosecute them for what I think he identified quite clearly as illegal gambling operations in North Carolina. So, we’re hopeful that will all these actions, with your investigations and what you’re doing, and as the light is shone more brightly on this corrupt industry that we will not have to deal with this much longer in North Carolina. But clearly as you have so well laid out there’s a tremendous amount of money behind this industry, when individuals from out of state are pouring hundreds of thousands of dollars into political campaigns in North Carolina, you’ve got to ask questions about what the intention of that is, and so we appreciate all that you’re doing.