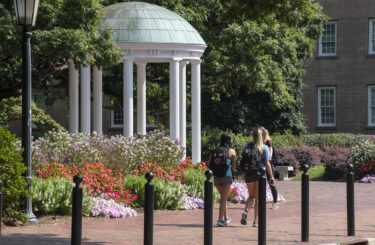 UPDATE: After posting our story, NC Family was contacted by officials at UNC-Chapel Hill, who told us that the Student Senate—not the Student Body President—has authority over the disbursement of funds to student groups. As a result, Vann’s executive order would not directly impact funding for student groups, including Students for Life. Regardless, NC Family believes Vann’s executive order is extremely discriminatory and should be rescinded. Our friends at the Foundation for Individual Rights and Expression (FIRE) have provided a helpful update on the status of this matter: UNC Chapel Hill student government commits to follow First Amendment after suggesting it wouldn’t fund pro-life student groups.

Following the U.S. Supreme Court’s ruling in Dobbs v. Jackson Women’s Health Organization, which overturned Roe v. Wade, the undergraduate student body president at the University of North Carolina at Chapel Hill issued an executive order to ban pro-life groups from receiving university funds. This action by the student body president has sparked a wave of opposition and is in direct violation of the UNC Student Constitution and Undergraduate Student Code.

Student Body President Taliajah Vann announced the order via Instagram on July 6, which prohibited the undergraduate student government from “contract[ing] or expend[ing] funds to any individual, business, or organization which actively advocates to further limit by law access to reproductive healthcare, including […] contraception and induced abortions…” Furthermore, the order states, “the Executive Branches shall prefer to contract individuals, business, and organizations that provide their employees a comprehensive suite of reproductive healthcare benefits.”

The UNC-Chapel Hill chapter of Students for Life is one of the student groups that would cease to receive university funds under this order. It immediately responded with an open letter to the Tar Heel community, rightly arguing that “these radical, one-sided actions of the UNC Student Government fail to recognize the diversity of thought at UNC-Chapel Hill and alienate a significant portion of the student body and faculty members.”

As WORLD Magazine points out in its article on this controversy, the executive order violates University policy, namely the “Statement of Diversity at the beginning of the UNC Student Constitution—which bans discrimination on the basis of “religion, creed, political ideology, political affiliation, political party,” among others—and the “Viewpoint Neutrality” section of the UNC Undergraduate Student Code—which says “Requests for funding must be made in a manner that is neutral to the views of the organization.”

Thankfully, numerous individuals and groups within and outside of the University have responded in favor of free speech and diverse viewpoints. Foundation for Individual Rights of Expression (FIRE) stepped in with a letter calling on President Vann to rescind the executive order by Thursday, August 11. Not only does the order violate University policy, but it clearly violates the First Amendment as well, said FIRE attorney Zach Greenberg in the letter.

Chancellor Kevin M. Guskiewicz then issued a statement on the University’s role in political discourse, saying, “Our university is a big and diverse place, making room for an array of different viewpoints, and that calls for thoughtful restraint on the part of leadership when it comes to weighing in on controversial issues.”

The Chancellor announced a resolution passed by the Board of Trustees that reaffirmed UNC’s “’respect for free inquiry and the obligation to cherish a diversity of viewpoints.’”

Chancellor Guskiewicz made no specific mention of the controversial executive order, however, and as of the publishing of this article, the order has not been rescinded.