Teetering on the Edge: Gambling in NC 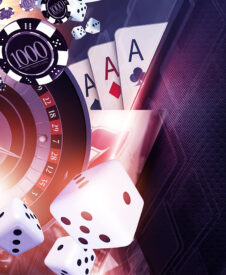 The baseball legend (and great philosopher) Lawrence Peter “Yogi” Berra once said: “If you don’t know where you’re going, you’ll end up somewhere else.”

Twenty-five years ago, Congress established the National Gambling Impact Study Commission (NGISC) in an effort to determine where the United States was going on the road of legalized gambling, and where it might end up if it continued down that road. The NGISC completed its final report in 1999, finding that at least 15.4 million Americans had a gambling problem—one that for many had resulted in criminal activity, homelessness, bankruptcy, suicide, domestic violence, and divorce. Fearing where America was headed, the NGISC recommended that the United States pause in traveling down the road of legalized gambling or face the consequences of ending up somewhere else:

“Without a pause and reflection the future does indeed look worrisome. Were one to use the experience of the last quarter century to predict the evolution of gambling over the next, a likely scenario would be for gambling to continue to become more and more common, ultimately omnipresent in our lives and those of our children, with consequences no one can profess to know.”

The United States ignored the NGISC’s instructions for a pause, and if we flash forward to 2021, it’s clear that the country ended up in the “somewhere else” foreseen by the commission. Legalized gambling is now practically omnipresent in American life, with casinos found in at least 43 states, state-sponsored lotteries operating in all but four states, and sports bets being legally placed in 21 states. While perhaps North Carolina moved more slowly than some, our state never really paused on its way down the road of legalized gambling. Since 1996, Cherokee tribal gambling has exploded from its beginnings as a single video poker hall into a gaming destination, with locations in Cherokee and Murphy offering unlimited Class III gaming, live table games, and sports betting. The North Carolina Lottery began selling tickets in 2006 and has had record sales every year of its operation, collecting more than $3 billion from the citizens of North Carolina in fiscal year 2020. And despite being clearly illegal for over a decade, convenience gambling in the form of internet sweepstakes is still readily available throughout the state.

Earlier this year, the National Council on Problem Gambling (NCPG) released its “National Survey of Gambling Attitudes and Gambling Experiences,” the first major national research study on gambling since the NGISC report. The NCPG Survey was conducted six months after the 2018 Supreme Court decision in Murphy v. National Collegiate Athletic Association, that repealed the Professional and Amateur Sports Protection Act and made it possible for states to legalize sports betting. The NCPG Survey found that 73 percent of Americans had gambled in the previous year, and that about seven percent of those bettors exhibited problem behavior.

Even with the historic growth in legalized gambling over the past quarter century, the NCPG believes that we are only right now at the beginning of “what is likely to be the largest and fastest expansion of gambling in our nation’s history,” and that sports betting will be the primary driver of that expansion. Looking to the horizon, it appears that North Carolina could very well participate in, and suffer from, this unprecedented expansion of gambling.

Although still illegal in North Carolina (other than on the premises of the two Cherokee tribal casinos), our state could soon become a hotbed for sports gambling if a few legislators have their way. Senate Bill 688 would legalize sports betting statewide, and its proponents believe that if passed, sports-loving North Carolinians would make their state the fourth most lucrative sports betting market in the United States (behind only New York, Pennsylvania and Illinois).

Casino gambling in North Carolina is also on the verge of monumental expansion. After years of failing to get casino gambling in its home state, the South Carolina-based Catawba Indian Nation is now close to building a gambling casino development in North Carolina. In January, Governor Cooper entered into a tribal-state compact with the Catawba to allow the tribe to offer full Las Vegas-style gambling at its proposed 200,000+ square foot gambling casino right off I-85 in Kings Mountain. Additionally, H.R. 1619 in Congress would grant the Catawba all the necessary rights to proceed with the Kings Mountain casino, and for the first time ever, allow a tribe to conduct off-reservation gambling outside the state that governs its gambling activities. Congress may also entertain legislation this year that could provide the Lumbee Indian Tribe of North Carolina with full federal recognition, including the right to pursue gambling operations in North Carolina.

But that’s not all. Two bills currently before the North Carolina General Assembly would regulate video game terminals and video lottery terminals, and one would broadly legalize casino-style convenience gambling throughout the state. And the actions of Virginia’s legislature could soon make non-tribal, destination casino gambling more accessible for some North Carolina residents. Our neighbors to the north recently authorized the construction of casinos in five of its cities, including a $400 million Caesars casino just across the North Carolina state line in Danville (set to open in late 2023), and a Hard Rock casino in Bristol (opening in 2022).

The NCPG Survey indicates that North Carolinians should be extremely concerned about this potential “next wave” of gambling expansion, especially given the types of gambling that would become more readily available and the potential for a dramatic increase in problem gamblers. For example, sports bettors—who tend to be young men—are the most vulnerable to problem gambling. The NCPG Survey shows that sports gamblers are three or more times as likely to report frequent risky behavior than those gamblers who did not bet on sports, and those betting weekly on sports are over five times more likely to report frequent risky behavior. Compared to non-sports gamblers, those wagering on sports were over five times more likely to say they’ve needed to rely on others to pay their debts or bills.

The NCPG Survey also reveals casino visitors are more likely to show high levels of problematic play. Of those who visit casinos on a weekly basis, 14 percent reported relying on others to pay their bills “many times,” and only 34 percent disagreed with the statement that “my chances of winning get better after I’ve lost.”

In his summary statement as a commissioner on the NGISC, Dr. James Dobson stated that a mountain of evidence presented to the commission demonstrated the direct link between problem gambling and “divorce, child abuse, domestic violence, bankruptcy, crime and suicide.” The founder of Focus on the Family concluded that “the Commission’s findings, from any reasonable perspective, depict a depth of pain and devastation in this country that compels a change in the way betting activity is regarded. Clearly, gambling is a destroyer that ruins lives and wrecks families.”

Twenty-five years after the creation of the NGISC, North Carolina stands at the threshold of a new, and perhaps unprecedented, expansion of gambling. Unless its citizens and legislators follow the NGISC’s directions and take quick and decisive action to halt the growth of sports betting and new casino gambling in the state, North Carolina could soon find itself so far down the road of legalized gambling that it will be unable to return from the devastating “somewhere else” warned of by Dr. Dobson and his colleagues so many years ago.