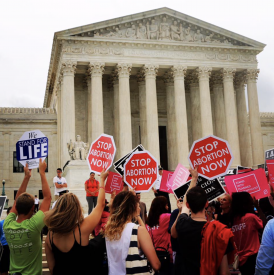 The United State Supreme Court ruled today, in a 5-3 decision, that important safety requirements for Texas abortion clinics violate the U.S. Constitution. In its first consideration of the abortion issue in nine years, the Court’s decision in Whole Woman’s Health v. Hellerstedt struck down a 2013 Texas law that had been mostly upheld by the U.S. Court of Appeals for the Fifth Circuit. As we previously reported, at issue were two provisions that would have required: (1) abortionists in Texas to have admitting privileges at a local hospital, and (2) abortion facilities to meet the same health and safety standards as ambulatory surgical centers.

“In an incredibly disappointing decision, the U.S. Supreme Court placed the interest of the abortion industry far above the health and safety of women and children,” said John L. Rustin, President of NC Family. “Simple common sense calls for a reasonable standard of care when conducting an invasive surgical procedure, but once again the high court has given abortionists a free pass. While it is unlikely that this misguided ruling will have any effect on North Carolina law, NC Family will continue to fight for the safety and welfare of women and children across our state and across our nation.”

Justices Breyer, Kennedy, Ginsburg, Sotomayor, and Kagan ruled in the majority decision that these enhanced requirements violate the 14th Amendment. They stated in their opinion that, “neither of these provisions offers medical benefits sufficient to justify the burdens upon access that each imposes.”

Justices Alito and Thomas were joined by Chief Justice Roberts in dissenting. Their dissent decried the lack of neutrality the majority demonstrated by failing to “be scrupulously neutral in applying [settled procedural] rules.” Justice Thomas wrote his own dissenting opinion “to emphasize how today’s decision perpetuates the Court’s habit of applying different rules to different constitutional rights—especially the putative right to abortion.” One consequence of today’s decision, according to Thomas, will be confusion among lower courts in how to apply a variety of jurisprudential standards in cases of all sorts going forward, as well as increased judicial power. “As the Court applies whatever standard it likes to any given case, nothing but empty words separates our constitutional decisions from judicial fiat.”