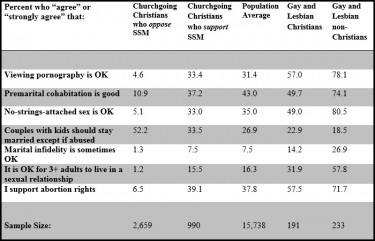 The results of a recent national survey on the attitudes of American churchgoers who support same-sex “marriage” provide new insights into the question of why same-sex “marriage” matters, especially to the Church. The survey was conducted by Professor Mark Regnerus, a sociologist at the University of Texas at Austin, who analyzed data from his recent Relationships in America survey to determine the “sexual and relational morality of Christians who accept the moral legitimacy of same-sex marriages.” Regnerus found that acceptance of same-sex “marriage” is associated with the acceptance of other harmful sexual lifestyles, behaviors, and attitudes that are contrary to the Biblical sexual ethic. 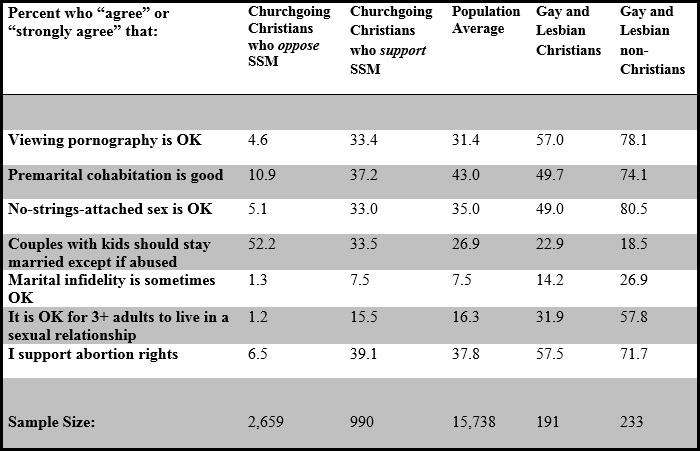 Writing about his findings in a recent article in Public Discourse, Regnerus is quick to point out that he is not arguing that acceptance of same-sex “marriage” by some Christians has caused their acceptance of these other lifestyles and behaviors. As he explains, “More likely, the sexual morality of many churchgoing Christians shifted years ago, and the acceptance of same-sex marriage as licit Christian action follows significant change rather than prompts it.”

The survey’s findings regarding the sexual attitudes of Christians are significant for a number of reasons. First, they show that Christians who accept same-sex “marriage” look very much like the world when it comes to acceptance of other harmful lifestyles and behaviors. The survey highlights what happens when Christians move away from a Biblical sexual ethic that says that men and women are uniquely different and complementary, and are designed for each other, that sex belongs inside of marriage between a man and a woman, and that sexual activity outside of marriage is not only contrary to God’s design but also harmful to individuals and society.

Secondly, it is noteworthy that all of the behaviors listed in the survey are associated with a host of negative life outcomes for individuals and society. For example: cohabitation prior to marriage is linked to higher rates of divorce; “hooking up” leads to a host of problems ranging from STDs to out of wedlock births and abortion; and viewing pornography is associated with a fear of intimacy, voyeurism, objectification of women, marital dissatisfaction, and, for some, sexual addiction and violence.

If same-sex “marriage” becomes more accepted in society, and if the attitudes highlighted in the Relationships in America study further infiltrate the Church, more Christians, especially young Christians, will be faced with enormous pressure to accept and support same-sex and other “alternative” sexual behaviors. As a result, it is more critical than ever for the Church to return to a Biblical sexual ethic that promotes marriage between one man and one woman as the only appropriate and proper context for sexual activity. It is also important for the Church to help young people understand why the institution of marriage, by its very nature and God-ordained design, creates the healthiest environment for raising children. Otherwise, an increasing number of our youth and adults will buy into a dangerous sexual ideology that distorts sex and gender, reduces sexual activity to a purely physical act, and glorifies sexual promiscuity in the name of “love.”