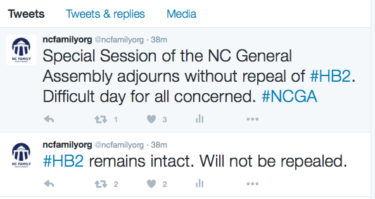 The NC General Assembly adjourned its fifth special session of the year this evening without repealing House Bill 2. After four days of rumors that a deal had been reached between leaders on both sides of the aisle and that the City of Charlotte would roll back the provisions that started the entire HB2 roller coaster, no agreement was reached.

The stalemate followed an intense day of discussion, debates and deliberations from which state lawmakers could find no ultimate resolution, leaving HB2 intact.

NC Family President John L. Rustin said during meetings prior to today’s session, it appeared there was little to no hope that HB2 would not be struck down. “We are grateful to all the good people of North Carolina who spoke out on this issue this week and who prayed for their legislators throughout the day. We applaud the members of the NC General Assembly who continued to stand strong in defense of safety, privacy and dignity of all of our citizens.”