“Save Women’s Sports Act” Gets Hearing in NC House Committee 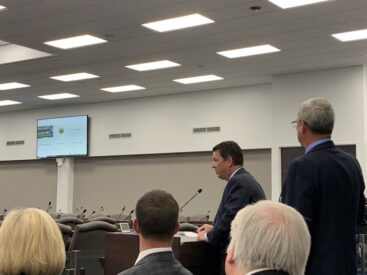 North Carolina’s Save Women’s Sports Act came before the NC House Judiciary 1 Committee today for discussion, but no votes were taken on the bill. House Bill 358 would protect the rights of women and girls in sports by preventing biological males who identify as female from participating on female sports teams. The bill does allow for the creation of co-ed teams, but requires that women’s sports teams are made up of solely biological females.

NC Family President John L. Rustin joined other supporters of the bill in encouraging the committee to pass H358. “To pretend that there are no biological or physiological differences between girls and boys, and women and men, is simply ignoring science and the truth,” said Rustin. He then urged approval of H358 “so that girls and women in North Carolina are safe, healthy, and free of discrimination in women’s sports.”

Beth Stelzer pointed out the immense physiological differences between men and women by sharing the story of Jennifer Thompson, a North Carolina powerlifter and multiple world record holder in the sport. While Thompson spent years of training, competing, and winning on the world stage, her teenage son—at her same body weight—was able to lift the same amounts.

Rep. Ehardt, a primary sponsor of Idaho’s Save Women’s Sports Bill, spoke on the lack of opportunities women and girls had in sports when she was growing up, and how the passage of Title IX changed the landscape of women’s sports. Allowing biological males to compete on women’s sports teams would roll back these Title IX gains, she said.

Dr. Brown discussed how three of five recent medical studies on transgender individuals showed no decrease in muscle strength in biological males who had been taking a year of testosterone suppressants and male-to-female hormones. The other two studies showed less than 10% decrease in muscle strength. “The science is pretty clear,” said Dr. Brown. “This does not create a level playing field.”

Evie Edwards, a professional cyclist and competitive runner, told the committee she is a lifelong Democrat who supports gay marriage. Nonetheless, she testified that she has faced attacks from transgender activists and threats of loss of sponsorships due to her public stance in defense of women’s sports. “There is a generation of women who will not have the same opportunities as I’ve had,” said Edwards. “If we are forced to compete against males at the local and regional level, those opportunities for women will disappear.”