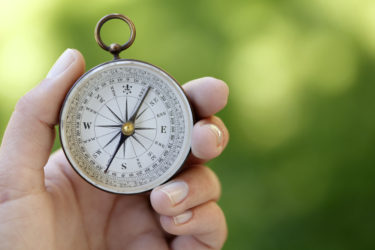 Imagine two brothers have been dropped together into the middle of a forest, each with the same map and the shared goal of getting home. Each has a compass to help him navigate, but each compass points in a different direction for north. Both young men are sincere in their attempts to get home, but in this situation it will be nearly impossible for them to agree on the best route. This disagreement will exist not because of a lack of intelligence or differing goals, but rather because of a fundamental difference in their guiding force—compasses that disagree on which direction is north.

This situation is analogous to many of the cultural divides and conflicts we are facing in America today. Americans no longer simply disagree about important issues and concepts. They disagree at a much more basic level. Just like those brothers in the forest, many Americans have disagreement about their basic guiding principles.

It is critically important to understand this when evaluating and engaging in the current conflicts surrounding religious liberty. Not only will this allow engagement to be more effective, but it will call us to focus on something more than short-term “culture war” battles. It calls us to focus on our deepest calling as Christians, to “go and make disciples of all nations.”

In this article, we will: 1) Identify the primary philosophical shift in guiding principles that has occurred in our culture and the measurable demographic and attitudinal effects it has had; 2) Highlight the current legal and political challenges surrounding religious liberty; and 3) Explain why those challenges are relevant to our deepest calling as Christians.

A Change in Guiding Principles

According to Christian author Tim Keller and Law Professor John Inazu, throughout much of America’s history, there was mostly a “monolithic way of thinking about religion and morality.” The vast majority of Americans, “whether or not they were devout, identified with some church and its basic teachings.” Despite some valuable contributions to society and culture, this way of thinking sometimes failed to recognize, and mobilize against, injustices and inequalities experienced by minority groups. This shortcoming, among other factors, helped “erode trust in social institutions” and bring to the mainstream a new way of interpreting the world that placed an emphasis on individual autonomy.

This new emphasis on individualism embraces the idea that identity, happiness, satisfaction, and worth are found primarily through the realization of one’s deepest desires. In this worldview, there are no moral absolutes, and thus morality is relative. Individuals are free to decide for themselves what is right and wrong, uninhibited by the unrealistic expectations and teachings of social institutions. As a result, the primary responsibility of political and social institutions is no longer seen as promoting a shared vision for the common good based on moral teachings, but to encourage and protect the right of individuals to live out their desires as they see fit. The highest calling of a person is to be their true authentic self. Any group or institution that criticizes these desires or attempts to encourage and/or discourage an individual’s behavior is viewed as evil and oppressive, because such efforts are viewed as an attack on the very worth and potential happiness of a person.

This way of interpreting and interacting with the world is at stark odds with the more “traditional” guiding principles that were dominant in the past and are still held by millions of Americans today. These traditional guiding principles put an emphasis on self-sacrificial duty and the existence of moral absolutes external to one’s internal desires. Under this traditional worldview, identity, self-worth, happiness, and satisfaction are found primarily in fulfilling the duties and responsibilities of one’s faith, family, community, and country. While individual political rights are emphasized and protected, morality and duty are seen as external entities that cannot be changed and are virtuous to follow. Institutions are viewed as trusted and time-tested vehicles essential for obtaining the shared goal of human flourishing.

A look at some demographic and attitudinal trends identified in recent polls by Gallup, Pew Research, and Barna provide a tangible illustration of the impact of this shift in guiding principles:

In just seven years, from 2007 to 2014, the percentage of those identifying as Christian decreased by a staggering 7.8 percent. Meanwhile the percentage of U.S. adults who do not identify with any organized religion (Unaffiliated) surged from 16.1 percent to 22.8 percent.

Those who have either “a great deal” or “quite a lot” of confidence in church or organized religion has decreased from 65 percent in 1973 to 41 percent in 2016.

Unsurprisingly, the shifts in religious affiliation and moral beliefs have made people skeptical and fearful of religion. A “full forty-five percent of atheists, agnostics and religiously unaffiliated…agree with the statement ‘Christianity is extremist.’”

Religious Liberty and How It Is Being Challenged

These philosophical, demographic, and attitudinal changes have prompted a substantial amount of social change, which has altered long-standing cultural norms that were in line with traditional Christian beliefs. Increasingly, Christians find themselves in situations where the culture around them holds drastically different beliefs than themselves. This situation has exposed and exacerbated some very tough and legally unanswered questions surrounding religious liberty.

In one sense, religious liberty is an extremely simple ideal that is easy to communicate and understand. It is the right of an individual in public and private to speak, write, worship, live and work in accordance with his or her beliefs and conscience. This right is recognized in the First Amendment to the U.S. Constitution, which forbids the government from establishing a state religion or prohibiting a citizen’s free exercise of their religion.

In another sense, religious liberty is an impossibly ambiguous ideal that is difficult to communicate succinctly or to fully comprehend. This uncertainty is born from the fact that, while there are almost no limits on the freedom to hold and express religious beliefs in America, there most certainly are numerous limits on the freedom to practice those beliefs. An individual, for example, is completely free to hold the religious belief that paying taxes is sinful. That individual, however, is not free to put that belief into action by not paying their taxes.

This tension between freedom of belief and freedom of practice is being strained like never before, because of the paradigm shift mentioned earlier. Christians have begun to see the freedom to practice their beliefs in the public square challenged. These disputes have included things like school prayer, access to school resources by campus ministries, government-imposed requirements on businesses and non-profits to offer contraceptives that can cause abortions, and, most recently, forcing individuals and business owners to use their time, talent and resources to celebrate marriages that go against their conscience.

These conflicts often bring a considerable amount of “political baggage,” and, unfortunately, devolve into classic “culture war” battle lines. The bulk of the public debate is over specific actions or the validity of certain beliefs, pitting social conservatives against secular progressives, with moderates wishing the conversation would go away. These very emotional debates draw attention away from meaningful discussions concerning the tension between religious beliefs and the freedom to practice those beliefs in the public square. The manner in which we resolve that tension, however, is much more important than the particular issues, because the approach will establish a political and legal framework that will affect future generations even after the current issues have changed.

To put it another way, we are currently determining the formula by which we will handle future instances, politically and legally, when sincerely held religious beliefs differ sharply with culturally dominant beliefs. We often become fixated on the variables of that formula and lose sight of the fact that it is the formula, not the variables, that will have a much more significant long-term impact, because the formula will remain when the variables change.

To illustrate why this “formula” is so important, we need to revisit our brothers from the beginning of this article. Two compasses pointing in different directions for north will undoubtedly cause the brothers to disagree on the best route home. If the brothers fail to work together and go their separate ways, they will grow increasingly further apart and ultimately reach drastically different destinations.

Likewise in America, the longer we operate with different guiding influences, the further apart we will grow in our attitudes and actions relating to social issues. It would be illogical and naïve to look at the demographic and attitudinal trends mentioned earlier, particularly among younger generations, and not conclude that there will be more social change in both the long term and the short term. Christianity and Christian beliefs will likely be seen as increasingly extreme, outdated, and counter-cultural.

This situation is both a blessing and a challenge for Christians.

It is a challenge for obvious reasons: there is a large, influential and growing group of people that has an antagonistic view of Christianity and Christian belief. In addition, social and governmental actions all around the world suggest that there will be less respect or legal accommodation given to religious beliefs that offend the sensibilities of that large, influential, and growing group. It is for this reason that we are currently called to fight for a legal and political framework that will protect the right of individuals and organizations to live out the unaltered Gospel in their public lives. If this were just a political or legal calling, however, it would not be worth our time, talent, or treasure. That is where the blessing part comes in.

We can learn how this situation might be a blessing by looking back.

We once more have the blessing of offering a critique and alternative look to the culture around us. And just like the early Christians, we may find that our perceived cultural weakness is in fact a great strength. The most effective tool we have in cultural engagement isn’t a legal theory, political strategy, or new marketing campaign. The most effective tool we have is a vibrant and life-giving Christian community full of Christ’s love that offers an alternative vision to the bleak, self-centered, individualistic, and utilitarian worldview of the culture around us. We need to vigorously defend religious liberty in order to protect the right of organizations, institutions, and individuals to portray that vision in public life.

The current legal and political conflicts surrounding religious liberty aren’t just about baking cakes or arranging flowers. They are not about trying to win the next political battle of the culture wars. Protecting religious liberty has a much deeper and more fundamental purpose. It is about helping to share the Gospel to a world that desperately needs it. It is about preserving the right to share the Good News to those who currently reject it or who have yet to hear it. It is about obeying the call to “go and make disciples of all nations.”