“Rare,” “Safe,” and Other Lies About Abortion 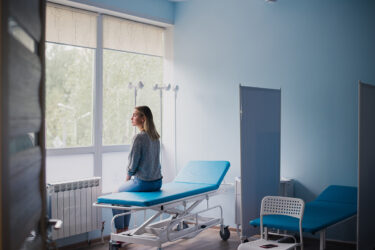 In 1973, the Supreme Court’s decision in Roe v. Wade made abortion legal throughout the United States. Since that time, the rhetoric has been consistent: Roe v. Wade ensured the right to safe and legal abortion; removing that right would have “fatal consequences;” and abortion is “one of the safest medical procedures.”

But is it true? Did making abortion legal through Roe also ensure that it was safe? Are women protected by the abortion industry? What about the unborn babies?

Last year, Americans United for Life (AUL) published a report entitled “Unsafe: America’s Abortion Industry Endangers Women.” In its nearly 200 pages, the report offers an in-depth look at the actual state of the abortion industry across America and analyzes data from individual states. It’s a sobering picture. In case after case, women are subjected to unsanitary conditions, untrained staff, and improper facilities and equipment. Patients’ privacy is neglected, facilities fail to follow state regulations, and warning signs of child abuse are ignored. The report specifically lists violations by more than 300 abortion clinics, and that is just in the states from which they were able to obtain data. All in all, AUL’s report shows an industry that is anything but safe for the women who entrust these providers with their bodies and their health.

AUL accessed inspection reports from state health departments that are responsible for oversight of abortion providers. These are public records available through standard Freedom of Information Act processes. Despite this, fifteen states submitted no inspection reports because they do not license or inspect abortion clinics. This is shocking when you consider the mantra repeated so often that “abortion is health care.” Another fifteen states have such weak inspection and regulatory frameworks that it’s difficult to get an accurate picture of the conditions in abortion clinics. This leaves just 21 states (with DC counted separately) in which AUL was able to obtain sufficient reports to accurately assess the safety of abortion clinics for the women who use them. 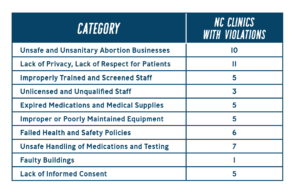 North Carolina was among the 21 states with robust regulatory regimes and inspection reports that were available to the AUL researchers, although “Unsafe” notes, “The inspections seem to have dropped in scope and consistency since 2017 when a new administration took office.”

All state inspection reports for abortion clinics in North Carolina back to 2013 are available online. In ten different categories, the researchers found documented failures by North Carolina abortion providers to meet the legal standards placed on them by the state. And it wasn’t just one bad actor. Those violations were found in fourteen different clinics in nine different cities – almost every abortion provider in the state. Some had as many as eight or nine different types of violations.

Many of these violations are quite serious, in one case so serious that the clinic involved was immediately shut down. North Carolina abortion clinics were cited for, among other things:

The violations themselves are hugely problematic. Failure to sterilize equipment is a very serious issue in a surgical setting. Infection is one of the more common and serious risks associated with abortion. Yet, in clinic after clinic, inspection reports reveal a failure to take cleanliness seriously.

Abortions can also result in internal injuries such as uterine perforation or cervical laceration. Sometimes, there can be significant bleeding which requires medical attention. Consequently, North Carolina law requires that women be observed for at least an hour after an abortion procedure and, if they insist on leaving, the clinic is supposed to obtain a signed “against medical advice” form. The law also requires that patients’ temperatures and pain levels upon discharge be recorded. Yet in one Planned Parenthood facility, women were routinely discharged after only about half the time required without any signed “against medical advice” forms. In another, temperatures and pain levels were never recorded, meaning that the abortion clinic had no way to assess whether women were beginning to display early signs of potentially serious complications.

The reports also revealed a failure of some doctors to examine the “products of conception” (POC) after abortions. In fact, in some cases, the estimated length of gestation wasn’t even recorded, making it impossible to verify that the POC is consistent with the age of the baby, but also leaving inspectors unable to confirm that abortions were only being carried out early enough in the pregnancy to comply with state law.

Consistently, there was a failure on the part of abortion clinics to even do basic things well. In one clinic, doctors weren’t wearing masks. The report quotes the regional director of Planned Parenthood’s Winston-Salem clinic as saying, “I thought we only had to provide PPE and it’s up to the employee to wear it or not…A lot of our [doctors] don’t use masks during procedures. We do not monitor the use of PPE.”

In still another clinic, medications that were supposed to be injected were instead administered orally. When asked about it, the physician said, “I don’t order [the medication]. The clinic decides. I just sign. … The nurse and clinic are independent from me.” Administering a drug in the wrong way can cause issues around absorption, dosage, and efficacy. But there’s also a “not my job” attitude that is disturbing from a physician to whom women entrust their bodies.

There were also other violations that, while not physically dangerous, would be unimaginable in normal medical settings. In one clinic, women’s medical histories were taken in busy hallways, where anyone could listen in on the conversations—a clear violation of HIPAA regulations. In another, there were no privacy screens or curtains at all in the recovery rooms, meaning that women weren’t even afforded the basic dignity of private space following their abortions.

A cavalier attitude toward patient safety is prevalent in these clinics. When abortion providers fail time and time again to take health and safety regulations seriously, it raises important questions about whether the health of the women they’re supposed to be serving is even a priority. Medical practitioners who care about women will want to ensure that they’re given the best care possible, that their bodies are protected from harm, that they’re treated with dignity, and that their privacy is protected. State inspectors found that, across North Carolina, women could not count on these basic protections when they sought care in abortion clinics.

The abortion industry consistently claims that abortion is safe, but the sorts of infractions found in clinic after clinic across the country and right here in North Carolina raise serious questions about the care being given to women in these settings. And these are just the physical safety risks, to say nothing of the psychological effects of abortion, the risks to future pregnancies, and the death of a child that is always the results of a “successful” abortion. Abortion is anything but safe.

Women should carefully consider whether the people operating clinics where these sorts of basic health and safety violations occur are really the best sources of information and care when they find themselves faced with an unplanned pregnancy. Are these places where they are likely to be treated with dignity, care, and respect, and where their best interests will be protected? This report would seem to indicate not. Women should understand that their needs would be best served by an OB/GYN who doesn’t depend on performing abortions for his/her living, or by a pregnancy care center that can offer pregnancy testing, ultrasounds, and advice, and has no primary financial interest in abortion.

Lawmakers, too, should take note of these findings. Clearly, the abortion industry is rife with the sorts of safety violations that put women’s lives and health at risk. This should concern all legislators who care about women and lawmakers should ensure that inspections continue to be carried out regularly, that standards are high, and that records of these inspections continue to be published online where they can be accessed by women considering abortions.

For nearly 50 years, Americans have been told by abortion advocates that abortion is safe, that keeping it legal protects women, and that abortion clinics are providing essential health care. AUL’s “Unsafe” report makes it clear that nothing could be further from the truth. It is important that we support legislation that helps protect women from an abortion
industry that, time and time again, demonstrates a woeful disregard for those women’s well-beings.

As Christians, we also need to be part of the solution, offering real and meaningful support to women who find themselves in unplanned pregnancies. By supporting them during their pregnancies, helping them to access comprehensive prenatal care, offering assistance as they begin to parent, or adopting children when moms decide not to parent, we can offer the sort of care and dignity that abortion clinics fail to provide.