POV: Unexpected Motivation To Soldier On 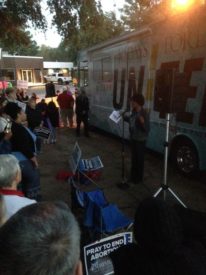 I would like to share with you a bizarre experience I had on Saturday evening, just days shy of what could be a landmark election for those who cherish the lives of unborn children. It was an unprecedented glimpse into the pro-abortion movement and one that—I’m quite sure—will affect me and my husband for years to come.

I am unabashedly pro-life. Not only because I think an unborn baby is as human as you and I and deserves protection—I do believe that. But because I think most women who choose abortion are making a decision they will regret, even if they never say it out loud.

Years ago, after I had a miscarriage, I understood like never before that you become a mother the day you know a child is within you. My husband is a wonderful and caring man, but he could not understand the connection I had with that child from the moment I learned I was pregnant. When I lost that baby at 11 weeks, I wept and grieved in a way that was difficult for him to grasp.

I earnestly think that no one among us can have an abortion and not pay for it emotionally at some point. It might not be immediately. It might take years to hit home, but for most women, they will understand the enormity of that abortion decision far too late for them to correct it.

That’s why my husband and I have, for years, provided monthly support for a wonderful pregnancy care center in Raleigh, just down the road from the NC State campus where my husband works. We want these young women who find themselves in unexpected pregnancies to be counseled by wise, caring, intelligent and thoughtful people during this frightening time.

Now, to what happened Saturday night.
As communications director for NC Family, I went to distribute the NC Family Voter Guides at a prayer vigil being held across the street from a Raleigh abortion clinic Saturday evening. My husband accompanied me.

The abortion clinic was closed for the day, and it was getting dark when we arrived. A brightly-colored bus from the national prayer group, 40 Days For Life, was parked across the street from the clinic, and a group of 50-60 people of all ages were gathered in a semi-circle listening to David Bereit, founder of the organization. He was encouraging them by telling stories of how prayers had helped outside abortion clinics all across the country.

Surrounding this small band of prayer warriors was a raucous crowd of 20-30 pro-abortion protestors. This, in itself, was not surprising, but it was how these protestors conducted themselves that was so disturbing. Several were dressed in tutus and most held signs. They were literally right behind our backs, and one even accidently hit my husband as she flailed her arms around taunting the person who was speaking. Another woman yelled, “I’m proud of my abortion!” When it was my turn to speak, a woman behind my husband yelled, “Shut up, B—–!” My husband let her know that she was referring to his wife! One repeatedly yelled out vulgar descriptions of body parts. When a woman shared her heartfelt regret over an abortion experience, they yelled and heckled. When our entire group knelt in the dirt to pray for those who were taunting us, this still brought no reprieve. They jeered and ridiculed and some imitated the words being prayed in a mocking manner.

As I watched this surreal event unfolding before my eyes, it occurred to me that these were the people who were likely to greet young women when they came to this abortion clinic for help. These disrespectful, unkind, rude women were likely the very ones who would be helping frightened young women make one of the most important decisions in their lives. When I contrasted that with the calm, loving, and professional atmosphere of the Gateway pregnancy center on Hillsborough Street, a profound sadness came over me.

When I was handed the microphone, I quietly greeted those who had endured that abuse for 45 minutes. Not one of them had returned any of the ugliness. Many smiled at me as I spoke through the din of chants and taunts. I encouraged them to use this experience as motivation to soldier on, to make one last push before the elections to encourage their pro-life friends and church members to vote!

The lines are clearly drawn. Candidates and party platforms on the local, state, and national levels either clearly promote pro-life policies, or they promote unrestrained and unregulated access to abortion at any stage of pregnancy. This year, there is no middle ground.

For those of us who believe that pro-life issues are among the most important considerations when choosing our leaders, I’m hoping this glimpse into the pro-abortion world will serve as a reminder and rallying cry for all of us as we vote this election. After all, many lives are depending on us.