POV: Protecting Teens’ Mental Health in COVID and Beyond 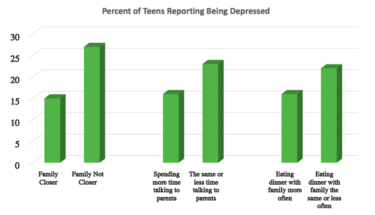 Over the last nine months, as all of us have adjusted to the changes and restrictions of a COVID world, I’ve heard parents talk a lot about the effects on their children. As adults, we all know it’s affecting us, and we see how kids’ lives have been disrupted. Many students have lost the routine of in-person schooling. They’ve been unable to spend time with most friends. Sports and other extracurricular activities have been suspended. Parents are, understandably, concerned about the educational, social, and emotional toll this is taking on their children.

It was with great interest, then, that I read a report published by the Institute for Family Studies entitled Teens in Quarantine, which focused on mental and emotional health. The researchers asked 8th, 10th, and 12thgrade students a number of questions between May and July, and compared the answers with those from identical questions two years ago, long before COVID.

The results were interesting. The number of teens reporting that they were lonely or depressed actually dropped a bit from 2018. The numbers indicating they were unhappy or dissatisfied with life rose some. Overall, the results suggested that perhaps there hadn’t in fact been the dramatic drop in mental health that many feared, that actually the picture had been fairly stable overall.

More interesting than that, though, were two factors that seemed to be important in improving mental health for kids. The first was sleep. When the survey was done in 2018, 55 percent of teens reported usually sleeping at least seven hours per night. After the onset of COVID-19, that number had risen dramatically to 84 percent. That is particularly significant since, among those who regularly sleep at least seven hours, only 16 percent say they’re depressed. For kids who sleep less than seven hours, that increases to 31 percent.

I suspect there are several factors here. First, as the authors of the study note, kids don’t have to commute to online school. Consequently, teens have been able to sleep later, and that has real benefits physically and mentally. It’s also likely that kids have been sleeping more because they’ve been doing less. Teens’ schedules can be brutal. School starts early, followed by sports practices, games, music lessons, and other activities. It’s late before homework even starts, and there can be a lot of it. COVID has cut out much of that busyness.­­

I find this absolutely fascinating for two reasons. First, I suspect that most teens would say that they’d rather spend time with friends and doing various activities than hanging out with their parents. Despite that, these survey results would seem to indicate that kids are actually happier when they spend more time with family.

Secondly, the survey seems to suggest that parents can actually do quite a lot to support their kids’ mental health, both during COVID and after. By leaning into the time together, prioritizing family meals over activities, finding time to talk with their kids, playing games as a family, and going for walks, parents have protected their children pretty effectively from much of the potential harm COVID has posed to mental health. That doesn’t have to stop when COVID is over and the world begins to return to “normal.”