POV: One Year After HB2—Where Have All The Feminists Gone? 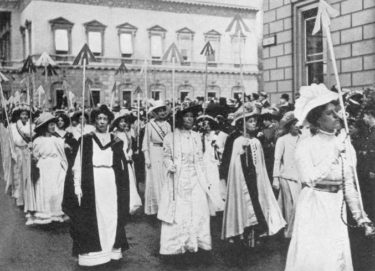 As with many women, the general atmosphere of my teen years was infused with caution about how to make sure I stayed safe. “You are less vulnerable if you: walk as if you know where you’re going; don’t wear suggestive clothes; don’t flirt too much so the guy won’t get the wrong idea; don’t drink because it can alter your judgment; don’t walk down dark alleys or go to restrooms alone; check around your car carefully before getting in; don’t sit in your car in a dark parking lot.” The list could go on and on. Even today, these cautions are a constant and oftentimes unconscious mantra that plays in my mind.

In light of this reality and as we pass the one year mark since the passage of HB2 (the “bathroom bill”), I continue to be baffled by my more liberal-minded friends—and it often seems, every news reporter and sportscaster in the entire nation—that label me a “bigot” because I am not okay with men and boys entering women-only spaces. Under recent efforts by the Charlotte City Council and LGBT activists, all restrictions would be removed regarding who could enter any restrooms, locker rooms, and shower rooms.

As a woman and former college athlete, I am also astounded with the silence from women leaders and organizations over measures being debated that would essentially gut the protections for female college athletes provided under federal Title IX. While the NCAA and the International Olympic Committee justify allowing men who identify as transgender to compete on women’s sports teams, the research they cite is not comprehensive and is far from settled science. Recommendations being advanced for high school and lower levels would not require anything but a declaration by the athlete as to their preferred gender.

In one sense, the lack of protest is understandable. On the first day of the NCAA men’s basketball tournament, I watched a series of stories bemoaning the fact that the NCAA moved games to Greenville, S.C. because of HB2. Nationally ranked coaches who live in our state took the opportunity to say demeaning things about our state, our lawmakers and others who have stood strong for the privacy and safety of women and children for nearly a year under an unrelenting storm of unfair characterizations and mudslinging. A long list of male newscasters, coaches, and sports personalities piled on to insinuate that somehow, if you support HB2, you are a bigot.

What the Charlotte City Council began in 2016, in part as a battle over bathroom access by those who identify as transgender, has escalated into a nationwide attempt to redefine the word “sex.” The Obama Administration’s Education and Justice Departments put their stamp of approval on this strategy when they issued a “guidance letter” to all public schools in the nation declaring that Title IX protections for women and women’s sports also applied to any male who declared that he identified as female. This letter has been rescinded by the new Administration but that has not put an end to the battle.

Many people seem to sincerely believe that HB2 is only about LGBT rights. I’ve heard it said repeatedly that the bathroom issue is a “smokescreen” for people who are opposed to gay rights. Whether you believe that to be the case or not, it doesn’t change the fact that the concept of gender fluidity (my gender is whatever I perceive it to be), which is inexplicably intertwined in this controversy, threatens women on many levels. However, almost no women and women’s organizations are speaking out on this issue!

In light of that silence, why would we expect men’s basketball coaches to stick their necks out to advocate for women-only spaces and Title IX protections when women leaders all over the country won’t speak up? And why would we expect any different perspective from male reporters and sports personalities? What do they have to lose? We should also not be surprised when some university presidents don’t speak out on these important women’s issues, because some college administrators have been trying to reduce Title IX protections since the law went into effect 45 years ago. If it went away, there would be a lot more money in their coffers. As a matter of fact, the NCAA Board of Directors is almost entirely comprised of college presidents and chancellors.

As women, we all have much to lose by the redefinition of the word “sex.” So where are all the women? Where are the feminists? Where are the predictable accusations that men dominate all of the high-revenue sports in all levels of our society and now they want access to women’s sports as well? Where are my predecessors who, nearly 50 years ago, fought valiantly for Title IX protections? Are they all dead and gone? Do those of us who follow in their footsteps honestly believe the representation of women’s sports in colleges and universities all over our nation would continue if Title IX was rendered moot? Surely we’re not that naïve!  Considering this, the silence from most women’s groups is deafening!

There is at least one group willing to speak up. Women’s Liberation Front is self-described as “unapologetically radical feminists” who fight “oppression of women” all over the world. They are one of the few liberal women’s groups who have dared cross the line on this issue. They outline their opposition on their website: “While press coverage may present this lawsuit as some snazzy headline about ‘transgender bathroom bills,’ that is a reductive characterization of this case. Title IX cannot create equity between the sexes in education by championing the rights of women and girls when it cannot legally distinguish males from females.”

But such a stance in our current culture is dangerous and often brings about a spewing of hateful rhetoric. A quick search on the Internet will be instructive in this regard. Anyone who strays from the approved talking points risks becoming a national punching bag, or worse, losing their livelihood.

And so it goes. Many of us stand around with mouths agape, not believing that we are even having this conversation, afraid to say what we’re thinking for fear of retribution. It’s like we’re trapped in the children’s book, The Emperor’s New Clothes. And any little children who innocently cry out, “But this doesn’t make any sense!” are whisked away and quickly enrolled in a mandatory cultural awareness class.

Our country was created on the premise that, as a society, we should have vigorous conversations over important issues so that we arrive at the best possible solutions. When one important voice does not bring their perspective into the marketplace of ideas, we are all cheated out of that point of view! Women-only spaces are important. Maintaining Title IX protections are too. Women and women’s organizations, it’s time to stand up and advocate for these important rights or we risk losing them!