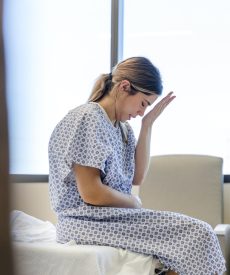 In a sickening example of just how far the liberal media is willing to go to normalize abortion, National Public Radio (NPR) aired a report yesterday (Nov. 3, 20220) that includes an audio clip of a woman undergoing a surgical abortion.

“You’re gonna hear this machine turn on now, okay, it makes a loud noise,” a female voice says—presumably the doctor—as a vacuum pump is activated. The next 20 seconds is heart-wrenching and nauseating, as a woman moans and groans while her unborn child is literally sucked out of her womb. The NPR reporter admits that the abortion procedure typically takes several minutes, but the short clip, as difficult as it is to hear, followed by an encouraging “You did it!” from the attending clinic staffer, makes the procedure seem quite routine and ordinary.

Moreover, the NPR story has an unmistakable “political” angle. The eleven-minute audio report is entitled, “What it’s like inside a Michigan abortion clinic, days before the midterm elections.” This comes less than a week before Michigan voters decide on a ballot measure that, if passed, would enshrine a constitutional right to “reproductive freedom” (i.e., abortion) in the state constitution.

According to NPR reporter Kate Wells, “In the Northland [Family Planning] waiting room, there are these inspirational quotes on the walls, like, ‘Good women get abortions.’ Another one says, ‘A lot of beautiful, wise women have been here before and are here today.’” Later, she describes the procedure room, “The lights are dimmed. There’s soothing music. It actually feels a lot like a childbirth.” “Whether it’s a birth or an abortion, it is often women guiding other women,” Wells says in an inspiring tone.

She interviews several women at the abortion clinic, most of whom already have young children and laud abortion as the solution to being pregnant. One woman, who has two daughters and is pregnant with twins from an abusive man says, “I’m so fertile, that it’s like literally I just have to stop having sex in order not to be pregnant.” Another married mother of three says she wants to go back to work and “just kind of have something for myself other than just being a mother all day every day,” so she is seeking an abortion.

The report also belittles pro-life pregnancy care centers, and paints them as deceptive, coercive, and unprofessional.

Of course, we have come to expect a certain level of bias in the media, especially from outlets like NPR, but the heartlessness of this report takes it to an entirely different level. NPR’s blatant attempt to normalize abortion and to influence the election in Michigan and across our nation is obvious and unmistakable.

I pray the callousness of this report will prick the heart and conscience of our nation as the evil of abortion is exposed.

After all, the lone voice not heard in NPR’s eleven-minute audio report is that of the child whose life was simply vacuumed away.