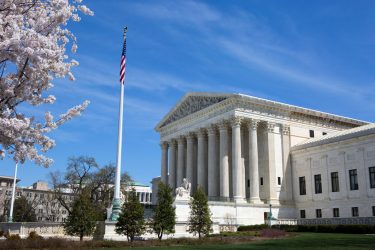 NC Family joined Family Policy Alliance, along with the Independence Law Center and 31 state organizations, in filing an amicus brief last week urging the U.S. Supreme Court to hear the case of Kerr v. Planned Parenthood. This case centers on a 2018 Executive Order issued by South Carolina Governor Henry McMaster that removed abortion clinics from the state’s list of “qualified” Medicaid providers. Instead of appealing this decision through the established Medicaid process set up by Congress, Planned Parenthood challenged the South Carolina policy in federal court.

Unfortunately, lower courts have agreed with the plaintiffs that abortion coverage should be required under Medicaid, meaning South Carolina cannot implement its ban on Medicaid funding for abortion clinics for the time being. Hence the appeal to the nation’s highest court.

The U.S. Supreme Court should reject the abortion providers’ suit, argues the aforementioned amicus brief, because: “Medicaid is a federal-state cooperative program that must be run according to uniform standards, remedies, and enforcement mechanisms to promote the intent of Congress. Permitting private litigants to sue every time a state terminates a provider’s ability to administer Medicaid services undermines this uniformity…”

“We are pleased to join with our friends at Family Policy Alliance and other Family Policy Councils to petition the U.S. Supreme Court to uphold the procedural requirements of the law,” said NC Family President John L. Rustin, “which in this case will protect innocent unborn lives. States should retain the right to determine which providers they cover and should not be forced by the court to allocate public funds for services that run counter to state policy.”

In an announcement of the amicus brief, CEO and President of Family Policy Alliance Craig DeRoche echoed these sentiments. “Planned Parenthood wants to force taxpayers to fund their abortion business and they’ll do whatever it takes to make that happen. But states should be able to tell Planned Parenthood ‘no,’ just as they should be able to say no to abortion itself. This case is about states’ rights under the Medicaid statute to make those critical decisions.”