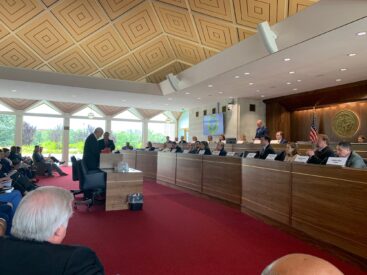 The NC Senate Judiciary Committee passed a bill today that would legalize marijuana for medical use across the state. Senate Bill 711, entitled “NC Compassionate Care Act,” would allow individuals with a “debilitating medical condition” to legally use marijuana and possess an amount that is “reasonably necessary to assure the uninterrupted availability of cannabis for a period of 30 days.” The bill would also establish a “medical cannabis supply system” for the production and distribution of cannabis and cannabis-infused products in North Carolina.

NC Family Director of Community Impact and Counsel Jere Royall (pictured right) addressed the Judiciary Committee and expressed NC Family’s concern about the legalization of medical marijuana. Royall noted that it has never been approved for use by the U.S. Food and Drug Administration. Moreover, the American Medical Association (AMA) has said it “believes that cannabis for medicinal use should not be legalized through the state legislative, ballot initiative, or referendum process.”

Additionally, as Royall shared with the Committee, a recent AMA court brief states that, “While it is possible there may be beneficial medicinal uses of marijuana, numerous evidence-based studies demonstrate that significant deleterious effects abound,” and that “without question, the public health risks are immense.” These risks include “drug abuse and addiction, change in brain function, lung disease, intoxication and impaired driving, developmental interference, impaired cognition, psychological illness, cardiovascular abnormalities, negative social functioning effects, and cancer.”

In a number of other states, the authorization of cannabis for “medical purposes” has led to the complete legalization of marijuana for recreational use. For years, NC Family has documented the myriad of social and psychological problems that arise from marijuana use.

SB 711 now moves on to the Senate Finance Committee. We need your help to prevent this bill from becoming law in North Carolina!

Please visit NC Family’s Action Center NOW to contact your State Senator and urge him or her to OPPOSE this very concerning legislation!