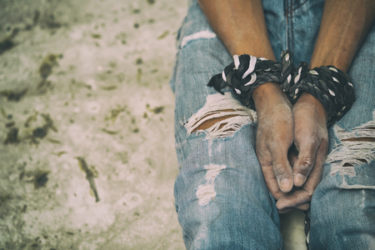 The North Carolina General Assembly is taking a strong stance against human trafficking this session, with proposed legislation that seeks to raise awareness of this tragic problem and to mitigate its effects. According to the National Human Trafficking Hotline, NC ranks in the top 10 nationally in reported cases with almost 2,700 victims in North Carolina identified in the last 10 years.  Although there is much work to do, two proposed bills in the General Assembly would make strides toward the ultimate goal of putting an end to this nefarious practice.

House Bill 910—Human Trafficking: Resistance and Rescue
HB 910 seeks to educate students about the dangers and signs of human trafficking, train law enforcement how to identify traffickers, and would allocate funds to help victims of trafficking that have been rescued.

The above pilot programs would begin in New Hanover, Wake and Mecklenburg Counties.

SB 548 received a favorable report from the Senate Judiciary Committee and was referred to the Senate Rules Committee. HB 910 has been referred to the House Rules Committee. NC Family will continue to monitor these important bills and keep you apprised of any important updates. To ensure that you will stay informed on these bills, be sure you are signed up for NC Family email updates.